So here it is, the first ever Judge Dredd comic strip... 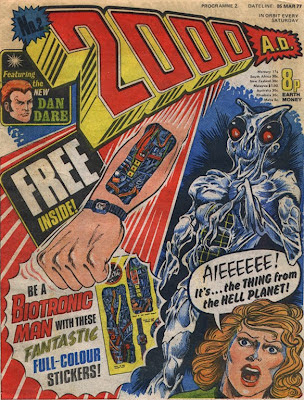 For just 8 pence Earth money, Squaxx dek Thargo could get their hands on the second ever Prog of the Galaxy's Greatest Comic. Lurking behind a Dan Dare cover by Massimo Belardinelli (left) and a free set of Biotronic Man Stickers were strips featuring Invasion, Dan Dare, Flesh, Harlem Heroes, M.A.C.H. 1, a Harlem Heroes Futuregraph and, of course, the first ever appearance of Judge Dredd. 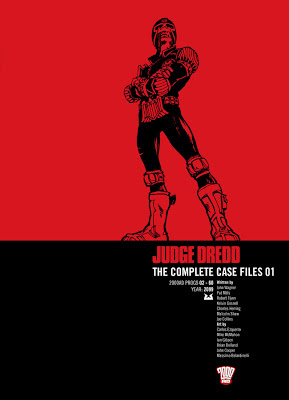 REPRINTS
As the first Judge Dredd strip 'Judge Whitey' has understandably been reprinted loads of times: 1981's Judge Dredd Annual 1982, 1991's The Complete Judge Dredd 1 and twice in Volume 2 of the USA's Judge Dredd book, firstly (and appropriately) in issue #2 and then again in issue #57. It also appeared in graphic novel collections The Best of 2000 AD and The Best Of Judge Dredd by Prion Books and most recently in Judge Dredd: The Complete Case Files 01 (still available from Rebellion, left).

It is available to read (entirely legally) online at  Barney.

In addition, it was edited, reworked and published as the first newspaper strip in the Daily Star on the 29th of August 1981 (and apparently the Sunday Telegraph as well).

SYNOPSIS
Judge Alvin is murdered by a known criminal who taunts the other Judges calling himself, Judge Whitey. Dredd goes after him alone.

FIRSTS & LASTS
This strip features the first appearances of Judge Dredd, Whitey, The Grand Judge, the Judges, their uniforms, bikes and guns.

The city of New York boasts buildings that soar miles into the air. Called star-scrapers they dwarf the skyscrapers of yesteryear. The Old Empire State Building is still standing, but is considered small and is described as being "in ruins". Raised roadways intertwine around the high rise towers.

Judges are elected by the people to enforce the law. The judges operate out of Justice H.Q. and are under the command of the Grand Judge. The Judge's uniforms are identical, except for a large badge worn on the left breast which bears the Judge's name. The uniform is made up of shoulder pads, the right of which is adorned with an eagle, elbow and knee pads, long gloves and long boots (the right boot contains a gun holster), and a belt which also features the eagle motif. They wear a helmet that covers most of the face, with the chin and neck the only flesh on show. They are armed and carry handcuffs. They ride around the city on bikes equipped with sirens and automatic pilot. Named Judges: Judge Alvin and Judge Dredd. The Grand Judge wears a more ornate uniform, a five-point star and a chain with an eagle sporting a large J around his neck. The correct form of address is "your honour". He can call in air squads to bomb buildings. Justice H.Q. features a memorial to fallen Judges entitled: "They Died Defending The Law". There are at least twelve badges, including Alvin's, mounted on the wall.

Devil's Island is a prison built on a huge traffic island in the middle of a vast inter-city highway complex. It is surrounded by roads filled with computer controlled juggernaut lorries that drive past all day and all night. Prisoners are transferred to the prison by the Devil's Island One Way Special. All the prisoners are serving life sentences.

JUDGE DREDD
Considered the toughest of the Judges (at least by one of Whitey's whinier henchmen). He has been patrolling Section Six of the city and there has been a dramatic drop in crime. Dredd regards the killing of a judge as "the most odious crime of all" (in fact he uses the word odious twice in two consecutive pages).

WHITEY
Leader of a criminal gang known by the Judges to be hiding out in the Old Empire State Building. He hates the Judges, although it's not made clear why or what his previous crimes were. He murders Judge Alvin, dons his helmet and dubs himself 'Judge Whitey'. He sends Alvin's body back to Justice H.Q. handcuffed to his bike with a note that reads: "Who You Gonna Send Against Me Now, Punks" and signs it Judge Whitey (to be fair to Whitey, Dredd's thumb may be obscuring the required question mark). Dredd kills his associates, but arrests Whitey and sentences him to life in Devil's Island. Quite frankly he has it coming.

THE GRAND JUDGE
He is aware of Whitey's hideout, but for some reason has not acted on this information. His first instinct is to bomb the Empire State Building, rather than send in Judges on foot. He seems to have depressive tendencies (see BEST LINES below), despite presumably having a desk job that probably precludes him from Alvin's fate. Maybe he is aware of this and his last line is motivated by a mix of guilt and an attempt to instil a sense of faux cameraderie with Dredd. Then again, maybe not.

DEATHS
Probably three. Judge Alvin, shot dead by Whitey with a laser cannon. Dredd shoots twice and the implication is that he kills both of Whitey's henchmen, although it's not explicit.

BEST LINES
Chief Judge: "Sometimes I think we're all going to die like Alvin, Dredd."
Judge Dredd: "Maybe, but in my book, that's the only way to go...in defence of the law!"

CATCHPHRASES
None, but I suppose it's a little early to expect any to catch on.

CONTINUITY & CROSSOVERS
Again none, but since this is the first strip, there is nothing to refer back to and it's early days for crossovers.

MISTAKES
Despite being set in New York, the strip is written in British English. Since the readership were British, it's difficult to really call this a mistake and I promise not to point it out again. Sorry.

RETROSPECT
The inescapable prison built on the traffic island is a nice idea, but it's not the satirical Dredd of later years.

NOTES
Although the title 'Judge Whitey' is widely used, the strip itself does not feature a story title. The first picture of Judge Dredd and of Dredd shooting the second of Whitey's goons on page 4 are both recycled from the then-unpublished test strip, 'Bank Raid' or The First Dredd and are drawn by Carlos Ezquerra. Now available in the first volume of the Case Files (see above).

CREDITS
There are no credits printed in the strip itself and so the following are taken from Barney:

Surprisingly as the writer of such an important strip, Peter Harris had a relatively brief 2000AD career. He also wrote an episode of M.A.C.H. 1 called Yeti (Prog 15) and two strips for Tharg's Future Shocks: Just Like Home (Prog 29) and Excursion (Progs 32 & 33). 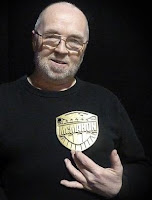 Mike McMahon went on to draw a great deal of Judge Dredd over the next few years regularly contributing to the strip until Prog 244 and sharing art duties on major storylines The Robot Wars, The Cursed Earth, The Day The Law Died, The Judge Child and Block Mania along the way. He left Dredd for a while, but returned for two strips in the Megazine and Progs 1154, 1308 and 1539. He worked on the Ro-Busters strip Fall & Rise Of Ro-Jaws And Hammerstein (Progs 103 to 115), and co-created follow up series A.B.C. Warriors, and drew six strips of it beginning with Mongrol (Progs 121 & 122). McMahon also co-created The V.C.'s and drew its first episode (Prog 140). He also illustrated a One-off called Superbean (Prog 245), five Slaine strips, the first being Warrior's Dawn (Prog 335) and the covers of 35 Progs and 3 Megazines. He was also one of many artists to contribute art to Tharg's Head Revisited in Prog 500. His blog is here.

McGowan is an enigma, albeit one with great handwriting.

REVIEW
The Judge Dredd that we know and love almost arrives fully-formed in this first strip. The story is not a complex one, but the script is great and establishes the world of Mega-City One (in-all-but-name) with ease.

The artwork is fantastic, particularly the cityscape on the first page and the view of Devil's Island on the last, but most deserving of a special mention is the truly horrific panel of Judge Alvin's corpse arriving back at Justice H.Q. (left). The page layouts are brilliant and give a real sense of urgency. The scenes of violence are easy to follow.

Sadly, it's easier to like Whitey than the Chief Judge, whose attitude is an odd one. The characterisation of Judge Dredd as the lawman who defends the law at all costs is simple here, but without being simplistic.