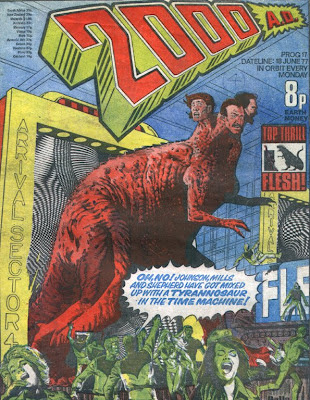 SYNOPSIS
The war is over, but Call-Me-Kenneth is still on the loose. Dredd tracks him down.

INFORMATION
Mega-City One has a huge Meg-Oil depot, a Robo-Pound for lost robots. The city's fire department use flying vehicles with nets. Civilians report crimes to Justice Central, while Crime Time is a crime-related TV show shown in the city.

There is a Texas City. Meg-Oil and Texas City Oil are oil companies.

Pleasure circuits are a great honour for robots. 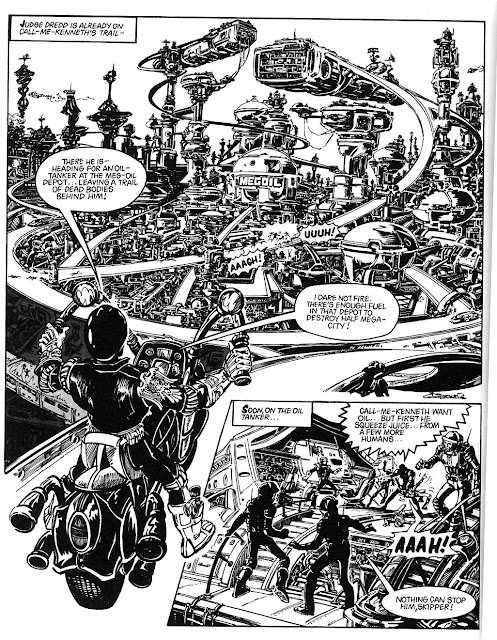 JUDGE DREDD
He follows Call-Me-Kenneth into the Meg-Oil depot and on board a flying oil tanker which the robot has stolen. He is knocked off by a jet of oil, but shoots an oil-covered Call-Me-Kenneth as he falls. The oil ignites are the robot is destroyed and Dredd is safely caught in a Fire Department net. Presumably he has crashed another Lawmaster in the pursuit. It is two days after Call-Me-Kenneth's destruction before Dredd manages to get home.

OTHER CHARACTERS
CALL-ME-KENNETH
Crazed, he heads to the Meg-Oil Depot and steals an oil tanker where Dredd destroys him. 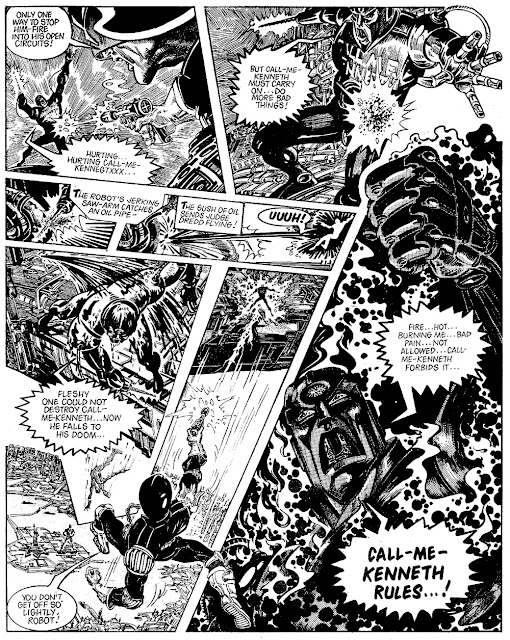 WALTER THE WOBOT
He is granted his freedom for services above and beyond the call of duty (and in bringing the robot war to an end). He is the first robot ever to be free. The Grand Judge refers to him as Robot Walter. The slogan written across his casing now reads 'I'm Walter, Try Me'. Tired of his brief freedom he moves in with Dredd, uninvited, to look after the Judge.

MARIA
She doesn't like Walter and calls him a bug.

HOWARD, STEWART & J70 STROKE 13
They are each awarded pleasure circuits for their part in ending the robot war.

DEATHS
18 humans, 1 robot. Call-Me-Kenneth kills thirteen oil workers, while four more fall to their deaths when he steals the oil tanker. Dredd kills an oil-covered Call-Me-Kenneth with a shot from his gun and the robot explodes.

CONTINUITY & CROSSOVERS
As Dredd falls from the oil tanker, we see the Statues of Liberty and Judgement from Judge Dredd: 'The Statue Of Judgement'. Also Texas City Oil may well make and market Grade One Texan oil, Call-Me-Kenneth's tipple of choice in Judge Dredd: 'Robot Wars', Part 4.

INFLUENCES & REFERENCES
The presenter of Crime Time strongly resembles Shaw Taylor, the contemporary Police 5 and Junior Police 5 presenter, and indeed uses his catchphrase (see CATCHPHRASES). The series were five minute episodes that appealed to the public for help to solve crimes and ran from 1962 to 1992.

REVIEW
It's a nice touch that Call-Me-Kenneth's final crime is simply another example of his first crime, but writ large. Ian Gibson's art does here more to cement the world-building of Mega-City One in six pages than the previous fifteen strips have managed. Dredd's first major storyline has made comprisons between Dredd and the robots, whilst also introducing some very emotional robots and so it seems as Dredd's scope as a character narrows, the possibilities of Mega-City One open up.