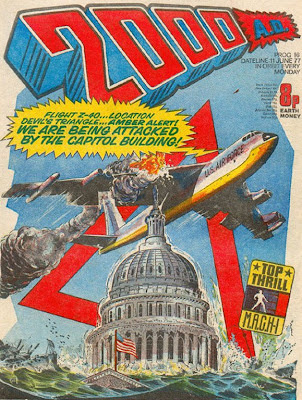 After another M.A.C.H.1 cover by Brian Bolland, this prog also featured Invasion, Dan Dare, Flesh, Harlem Heroes and M.A.C.H.1 strips and was the last prog edited by Pat Mills.


SYNOPSIS
Call-Me-Kenneth attacks the Grand Hall of Justice, but Dredd uses the weather against him.

FIRSTS & LASTS
First time that a story has lasted to seven parts. First use of the word Drokk and the term Chief Judge.

INFORMATION
Mega-City Atmosphere Control, is a floating Strato-Station above the city. Electric storms have been illegal in Mega-City One since 2012. 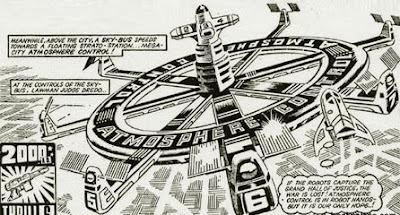 JUDGE DREDD
He can pilot a sky-bus and rewire both computers and robots. Dredd programs the atmospheric control computer to create an electric storm and the ensuing lightning strikes the heavy metal kids and they turn on each other.

WALTER THE WOBOT
Dredd wires him into the atmospheric control computer to override its inability to create electric storms.

OTHER CHARACTERS
CALL-ME-KENNETH
He declares himself as the king of the robots. He receives a hit from a heavy metal kid and for a while is presumed dead, but his body is missing. 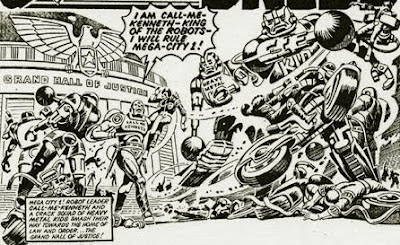 THE CHIEF JUDGE
At one point Call-Me-Kenneth has him, but he has been freed by the time the Heavy Metal Kids turn on their leader.

DEATHS
The Chief Judge states that thousands have been killed.

BEST LINES
Overly Dramatic Judge: "Look! Look how the very sky grows black! It is an omen - We are finished!"

WORST LINES
Walter: "Walter's feeble bwain does not yet gwasp your plan, Master."

INFLUENCES & REFERENCES
The use of a weather control facility brings to mind a pair of Patrick Troughton era Doctor Who stories, namely The Moonbase (1967) and The Seeds Of Death (1969).

MISTAKES
The 'Continued Overleaf' is odd. Instructions on how to turn a page?

RETROSPECT
The 2012 law against causing storms may seem far fetched but actually causing hostile weather has been illegal in a sense since 1978: Weather modification, particularly hostile weather warfare, was addressed by a UN Resolution "on the Prohibition of Military or Any Other Hostile Use of Environmental Modification Techniques" and entered into force on the 5th of October, 1978.

REVIEW
The use of lightning to attack the robots is great, but all the more impressive is overcoming the illegality of bad weather and the bewildered "Wh-what is it?" reaction of someone who has presumably never seen lightning. The rolling rota of artists on 'Robot Wars' invite greater comparison between them. Ron Turner's artwork is in no way bad, but it lacks the visual flair of the work of McMahon or Gibson. That said, the panel of the four Heavy Metal Kids smashing, crashing, bashing and mashing with childlike grins on their faces is terrifying.

Note For Readers On Mercury - Your Delivery Shuttle Delayed By Solar Storm.
Posted by Dave at 10:00