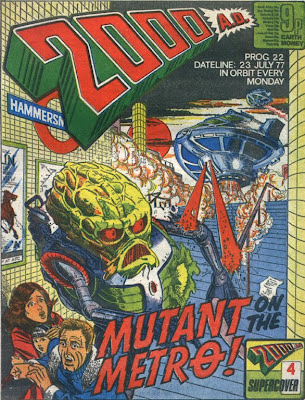 SYNOPSIS
Dredd arrests a murder gang and then goes in search of its leader.

FIRSTS & LASTS
First mention of isolation cubes and first use of "Dok!".

INFORMATION
Mega-City One is a giant Metropolis. 3rd Street and Grover Street are in Oldtown (which is not in Sector 4), which apparently has only one cheap hotel and a expensive shop called Sears & Roeb. 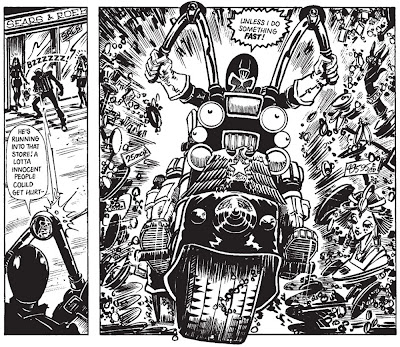 The Public Health Act of 2087 protects citizens against unsanitary buildings. Judges can order a demolition order for a particular building and the city will pay compensation.

Harbouring a fugitive is a crime. Committing murder will get you forty years in an isolation cube, but a Judge can use discretion during sentencing.

Mutants are banned from Mega-City One and sometimes carry distinctive throwing knives.

Judge's Lawgivers can be set to rapid fire.

JUDGE DREDD
He reduces a lawbreaker's sentence in recognition of co-operation by one day. He burns down a building containing a lawbreaker's hideout and infers that he could have arrested its owner for harbouring a fugitive. 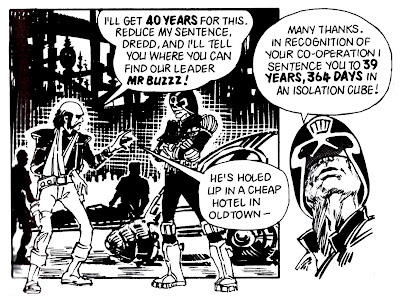 OTHER CHARACTERS
MR BUZZZ
Mutant leader of a murder gang. He has no eyes, but can see in total darkness. He makes a sound that bzzzzes and it works like a bat's radar. He was based on the second floor of a cheap hotel in Oldtown. 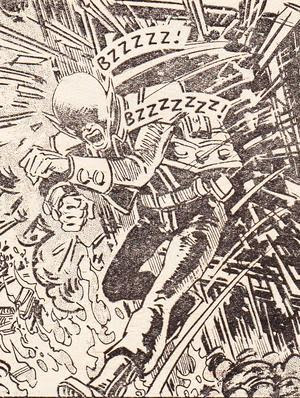 ARRESTS
At least three. Mr Buzzz and two of his murder gang.

BEST LINES
Dredd: "I'm burning it down under the public health act of 2087. The place is infested with a rat!"

CATCHPHRASES
"Dok!" appears to mean God, but only in a taking the Lord's name in vain sort of way.

CONTINUITY & CROSSOVERS
3rd and Grover were previously mentioned in Judge Dredd: 'The Comic Pusher'. It's obviously not a very nice part of town.

INFLUENCES & REFERENCES
Mr Buzzz is like a cross between Batman (1939) and Daredevil (1964), while his car somewhat resembles the Batmobile from the Batman TV series (1966).

RETROSPECT
It seems unlikely, but the sling wearing bald Lawbreaker would be due out of his iso-cube in 2139 and so a sequel could be a possibility in 2017.

REVIEW
This strip is a lot of fun. Mr Buzzz himself is a great spin on the mutants and Dredd's reduction of a perp's sentence for his co-operation by a single day is fantastic.
Posted by Dave at 10:00