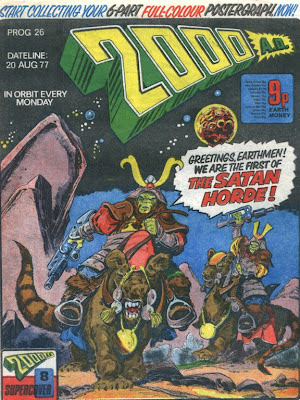 NAME
Judge Dredd: 'Dream Palace'
(according to The Dredd Files in Megazine 214, this strip is also known as 'Pleasurama')

SYNOPSIS
Dredd must prevent a crime he saw in a Lawbreaker's dreams.

FIRSTS & LASTS
The appearance of the Covenant Of The Judges is the first indication of how they took over the law and order of Mega-City One.

INFORMATION
(This strip is set over the course of three days, the last of which is Justice Day)

Mega-City One has 800 million citizens. Few people in the city work more than two hours a day and therefore have much more leisure time.

The Dream Palace has a machine that encourage dreams in the human brain. The dreams are created by flooding the brain with millions of super-charged electrons and stimulating the area of the sub-conscious that creates dreams. The machine has a pleasure gauge that can be set to the Nightmare Zone, which is regarded as dangerous and is available for medical use only. All dreams are recorded by the Dream Palace's central computer and can be reviewed. You can also buy a dream for your dog. 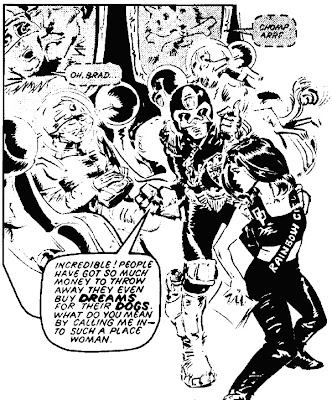 The Transatlantic Express has been destroyed. The water in Sector 4 has been poisoned. The Space Academy was recently destroyed by an explosion.

The Covenant of the Judges: "Show us your Lawbreakers and we shall show them justice. Mega-City will be crime-free. Trust in the Judges!"

Justice Day is celebrated with a parade. The parade features at least four floats: one displaying the Covenant of the Judges, one marked In Memoriam, another for the Riot Squad and a fourth featuring a huge statue of a Judge carrying a book of Law and The Sword Of Justice. Dozens of Judges take part in the parade. Named Judges: Judge Mick. 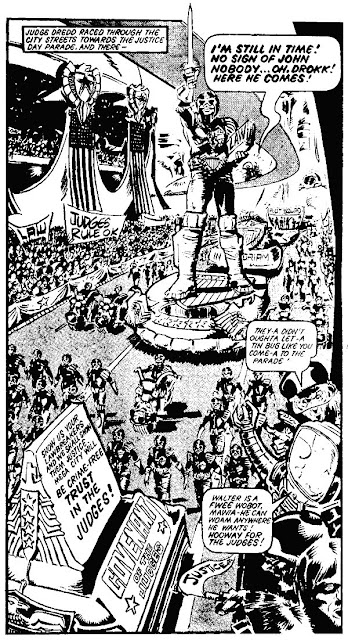 JUDGE DREDD
He watches Nobody's dream and realises he is going to attack the Justice Day Parade. Dredd heads to the site of the parade and sights Nobody. The Judge leaps from his Lawmaster onto Nobody's hovercar, shoots out the napalm controls and lands it on the foot of the Judge's statue float knocking the Sword of Justice from the statue's hand, with fatal consequences.

OTHER CHARACTERS
THE CHIEF JUDGE
He confidently connects the three large scale crimes. Presumably he is part of the Justice Day Parade. Dredd refers to him simply as Chief.

MARIA
She attends the Justice Day Parade with Walter.

WALTER THE WOBOT
He attends the Justice Day Parade with Maria.

JOHN NOBODY
His real name apparently. Nobody has three unauthorised nightmares at the Dream Palace and attacks the Transatlantic Express and the Space Academy (and presumably poisons the water of Sector 4). He strikes the Justice Day Parade with a hover car armed with napalm spray and burns at least four Judges before Dredd can stop him. He is killed by the Sword Of Justice falling from a parade float.

DEATHS
One. John Nobody killed by the falling Sword Of Justice. 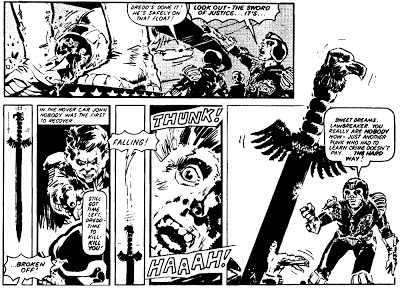 BEST LINES
Rainbow Girl: "Welcome to the Dream Palace, Mr - uh...Nobody, isn't it? John Nobody? Same as usual, sir...Private cubical?"
John Nobody: "That's right, miss I like to keep my dreams to myself."

WORST LINES
Dredd's obvious contempt for the Dream Palace's Rainbow Girl is pretty bad, since she does more detective work here than he does.

MISTAKES
How does the Grand Judge know that Nobody's three crimes are all perpetrated by the same man?

RETROSPECT
It may not be the same as Justice Day, but since 2010 the 17th of July has been the World Day for International Justice.

NOTES
Presumably Judge Mick is the closest Mike McMahon has come to a Hitchcock-style cameo.

REVIEW
The ideas behind this strip are brilliant, but it's not clear whether Nobody's dreams come true as a subliminal act or because he is dreaming what he wants to happen. The artwork for the Justice Day parade is impressive, but Rainbow Girl is drawn in some very odd poses.
Posted by Dave at 10:00