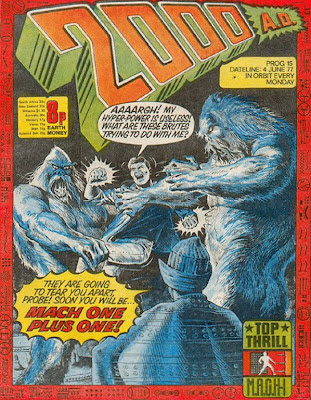 
SYNOPSIS
Dredd and a small group of robots turn the tide of the war. The robot war becomes a robot civil war.

FIRSTS & LASTS
First time that a story has lasted to six parts.

INFORMATION
There are at least 372 overseer robots. Some of the robot rank and file have begun to dissent. When the original law of robotics is reinstated into newly constructed robots, the two factions clash almost immediately.

Synthi-Caff is a coffee substitute.

JUDGE DREDD
He swaps the robot computer programming circuit so that the original law of robotics is installed into every new robot made on the assembly line. These robots attack Call-Me-Kenneth's forces.

WALTER THE WOBOT
He has located three other dissenting robots: Stewart, Howard and J70 Stroke 13. The phrase 'No Charge Try Me' is written across Walter's casing.

OTHER CHARACTERS
CALL-ME-KENNETH
He takes a squad of Heavy Metal Kids (at least three) to the steps of the Grand Hall of Justice. He wants all the judges dead and to kill the Grand Judge himself.

THE GRAND JUDGE
He is presumably trapped inside the Grand Hall of Justice by Call-Me-Kenneth's Heavy Metal Kids.

HOWARD
A robot who is disenfranchised with Call-Me-Kenneth's rule. Howard found the robot computer programming circuit containing the original law of robotics on the shop floor.

BEST LINES
J70 Stroke 12: "Corrode Call-Me-Kenneth! Robots were better off when humans were the masters-"

J70 Stroke 12 says corrode almost as if it is a robot swear word. I hope this catches on.

WORST LINES
Dredd (whilst shooting a robot in the face): "Heads you lose, Tin-Ribs!"

CATCHPHRASES
Both "Fleshy ones" and "Hail Call-Me-Kenneth!" are heard three times each.

RETROSPECT
The panel of "Hail Call-Me-Kenneth!" being replaced on the assembly line by "I am the slave of humans!" is very like a sequence in Futurama's Obsoletely Fabulous (2003).

REVIEW
The artwork has varied enormously across 'Robot Wars' and it's nice to have McMahon back. His Call-Me-Kenneth on the first page is very imposing, his page layouts are dynamic and the pile of robot bodies that forms a backdrop to the Grand Judge's plight on the last page is very nice indeed. It's good to see the return of the multi-limbed style robot as well.

More Next Week
More Tomorrow
Posted by Dave at 10:00