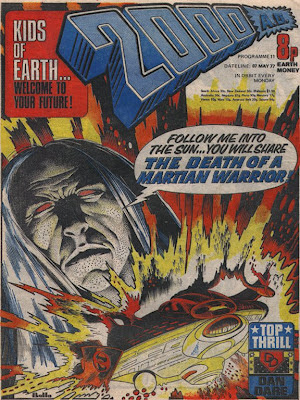 
SYNOPSIS
Dredd calls for the robots to be dismantled and resigns when his request is refused. Call-Me-Kenneth is reconstructed and begins his war against humanity.

FIRSTS & LASTS
First time that a story has lasted to two parts. The Grand Judge and Call-Me-Kenneth both reappear which marks the first reappearance of a character other than Dredd.

INFORMATION
The citizens of Mega-City One would never agree to working more than a ten hour a week.
XTV is one of Mega-City One's TV channels, it broadcasts a programme called Medicine Today, which broadcasts robot repairs (presumably it also features medical operations as well). The programme is interrupted by Call-Me-Kenneth's call to arms. The Robot uprising affects Sectors Two, Four, Seven and Nine of the city at least.

Robots have obedience banks and apparently feel pain when breaking the laws of robotics.

JUDGE DREDD
He calls for special powers to destroy all the hi-grade robots in the city and resigns when the Grand Judge refuses to grant them to him. Dredd returns when the crisis he predicted occurs and the Grand Judge is forced to pass the very same laws anyway.

OTHER CHARACTERS
THE GRAND JUDGE
The Grand Judge sits in the Council Hall of Justice. He has the power to pass emergency laws to declare war on the robots, but does not use it pre-emptively at Dredd's request for apparently political reasons.

CALL-ME-KENNETH
Robot K12 Call-Me-Kenneth killed fourteen people. Doctor Arnold Wisenheimer rebuilds him and provides him with a new body casing, a new head unit with an improved third eye and his left forearm is now replaced with a carpenter's drill. He is accidentally reactivated live on TV, by the charge from a soldering lance dropped into his circuitry. He uses the broadcast as a platform to call for a robot uprising and kills Wisenheimer live on TV. 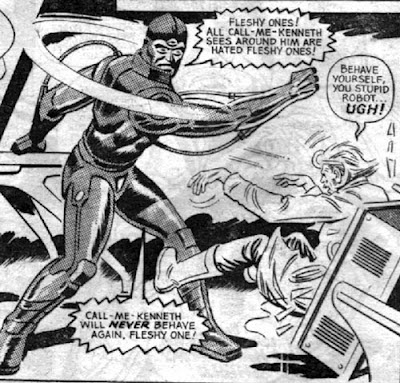 DEATHS
At least five. Wisenheimer is killed by Call-Me-Kenneth with his brand new drill (see below). Graham throws both his masters out of a window two miles up. The Android Office Workers stab their boss to death with their umbrellas. Another human is thrown from a balcony. 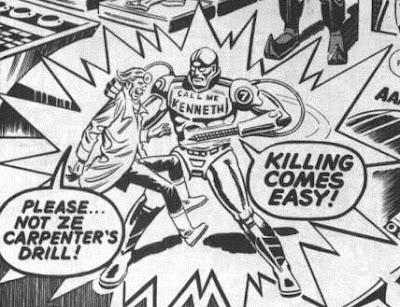 You had that coming, mate.

CATCHPHRASES
Call-Me-Kenneth uses variations on his phrase "Fleshy Ones" five times, while impressionable Graham copies it once and emballishes it to "Fleshy Scum".

CONTINUITY & CROSSOVERS
There are references to Call-Me-Kenneth's activities in 'Robot Wars', Part 1, and it transpires that fourteen people died as a result of his robbery. 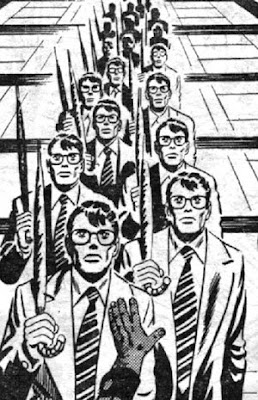 MISTAKES
It's unfortunate that Graham seems to blow a fuse from his groin (below). 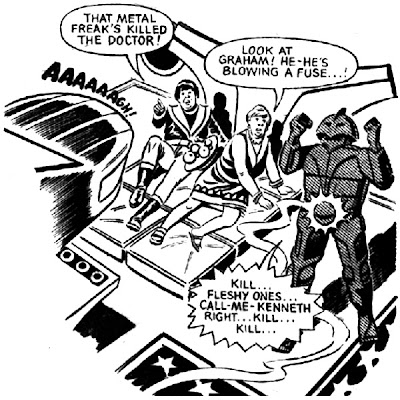 RETROSPECT
It's interesting that they play the Dredd resigns card as soon as this and also that they choose to resolve it so quickly.

REVIEW
It's great to see Dredd sticking to his principles, but it would be nice to have seen Citizen Dredd walking around Mega-City One as it falls apart and the moment of realisation that his city needs him. The new design for Call-Me-Kenneth is impressive, but the logic in him acquiring it is a bit odd. The artwork varies, but the panels featuring an army of Clark Kents marching toward the reader and Wisenheimer about to get drilled are astonishingly good.