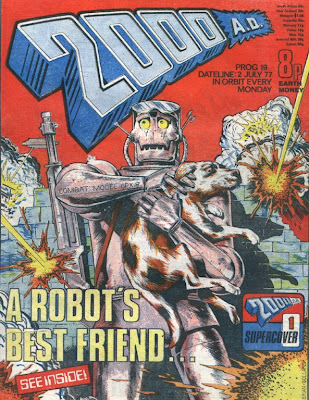 This prog also featured Invasion, Dan Dare, Flesh, Harlem Heroes and M.A.C.H.1 strips nestled behind the first of twenty-five consecutive supercovers. They're very nice, but I have no idea what makes them so super. This one is by Brian Bolland.

Mega-City One is the most advanced city on the planet. Anti-litter campaigns have cleaned up its streets. Clean air laws have given it a pollution free atmosphere. Vehicles charged with gross pollution of the atmosphere are condemned to immediate destruction. Petrol burning cars are required to have an exhaust purifier fitted. Drivers are still required to carry licences.

JUDGE DREDD
He expects to be busy on a night with a bright moon and calls it a Mugger's Moon. Dredd is clearly appalled with the motorist who abandoned his fellow citizen to die. 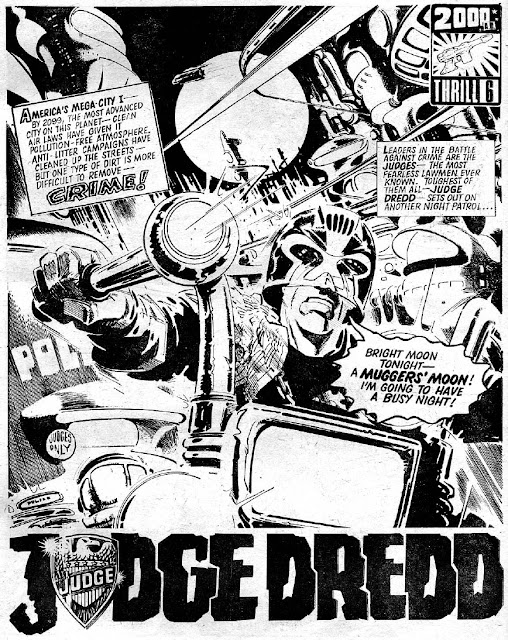 OTHER CHARACTERS
F. NIXON
He has no criminal record. He abandoned someone during a mugging. Nixon drives an old twentieth century petrol burning car which cost him a fortune, During the mugging his exhaust purifier is pulled off and Dredd prosecutes him for gross pollution of the atmosphere and destroys his vehicle accordingly.

ARRESTS
None. Although Dredd does destroy a car for gross pollution.

BEST LINES
Mugger: "We'll take your money, sucker- But we'll hurt you, too- Just for fun!"

WORST LINES
Mugger: "He's got Lou and Gerry with a 'Hot Shot'! I'm getting out of here!"

You might still be alive if you hadn't made a speech about it.

INFLUENCES & REFERENCES
This strip may may have been inspired the belief that crime rises dramatically around a full moon. Statistically this has been largely disproven.

MISTAKES
One of the mugger's smashes the headlight on Dredd's Lawmaster, but it seems to be working fine at the end of the strip.

RETROSPECT
The exhaust purifier in this strip pre-dates the particulate filter in Diesal cars and although it didn't come before the catalytic converter it was still published long before they were in widespread production.

This is the first of four Judge Dredd strips written by Gerry Finley-Day. He also wrote for Ant Wars, Blackhawk, The Collector, Invasion, Dan Dare, Fiends Of The Eastern Front, The Hand, Harry Twenty, Jake's Platoon, Rogue Trooper and The V.C.'s

REVIEW
This strip is bleak in tone and the artwork feels more seventies than other Dredd so far. On the surface this strip wouldn't seem to tell us much insight into Dredd, but the way he deals with Nixon shows that his ethics extend beyond the letter of the law.