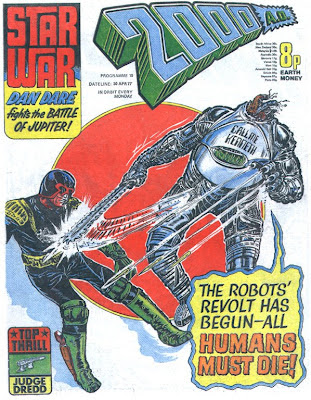 
SYNOPSIS
Dredd deals with a robot lawbreaker and considers the implications for humanity.

INFORMATION
In Mega-City One, robots do the hard work and their human masters tend to take it easy. Robot conduct is dictated by their programming and the laws of robotics, the third law is to always obey humans. Robots need oil.

Sector 9 of the city features a State Oil Store, the Skyrail and garbage chutes in the streets, marked Keep America Clean. 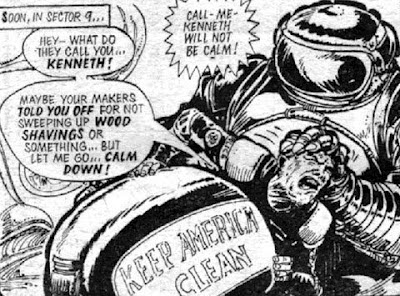 High explosive ammunition is Setting 5 on a Judge's gun. There are police that aren't Judges and they patrol in hover cars.

The Skyrail gets its power from an overhead cable.

JUDGE DREDD
He predicted that robots given emotions would also use those emotions for evil. Dredd is called to the scene of the Call-Me-Kenneth's crime and attempts to reason with the robot. When this doesn't work he blows its head clean off.

OTHER CHARACTERS
CALL-ME-KENNETH
A carpenter robot that robs a State Oil Store and kills at least seven. He refers to humans as "Fleshy Ones". He can fire nail from his fingers and has a chainsaw attachment. He wants to rule Mega-City One. Dredd destroys his head with high explosive ammunition, but it doesn't stop him, so the judge electrocutes him and the robot accidentally cuts himself in half with his own chainsaw.

WALTER THE ROBOT
Robot who works in the Justice H.Q. Judges' canteen. He displays today's menu on his screen and features the slogan 'I'm Walter Try Me' on its front. He wants to please. Dredd describes him as "a vending machine robot programmed to be nice to humans!"

DEATHS
The death toll is reported as "at least seven". Call-Me-Kenneth destroys a police hover car containing two police officers and presumably if the explosion doesn't kill them then the fall will. It's unclear who the other five were.

BEST LINES
Call-Me-Kenneth: "Now the slave will become the master!"

There are probably better lines, but I like how neatly this sums up the story. 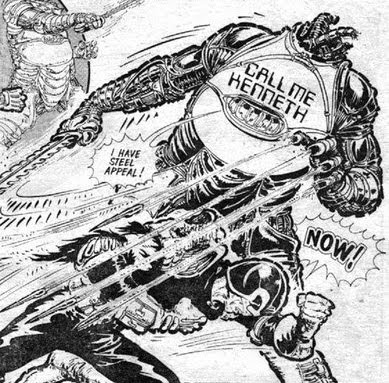 CATCHPHRASES
Call-Me-Kenneth uses variations on "Fleshy Ones" five times. Walter doesn't have a speech impediment yet.

INFLUENCES & REFERENCES
The three law of robotics were introduced by Isaac Asimov in his 1942 short story Runaround (although see MISTAKES below).

MISTAKES
Dredd says that Call-Me-Kenneth has broken the third law of robotics. If the laws in question are still Asimov's then he has actually broken the first.

Also Call-Me-Kenneth's speech bubbles vary from jagged to normal and back again. On a very minor note, Mega-City One is written without the hyphen once here.

RETROSPECT
The existence of a State Oil Store proves that either oil didn't run out or they now sell some sort of substitute. It also implies there might still be states, as in United, and of America.

NOTES
Oddly for the first part of a story, the last caption is a very definite The End.

REVIEW
Fantastic. The fight between Dredd and Call-Me-Kenneth is engaging and symbolic in a way that similar sequences with Whitey, Scarface or Krong have not been. The only gripe is that we don't get to see the full extent to which robots are integrated into Mega-City One society and therefore we can't fully grasp the scale of the problem at hand. There isn't much indication that this is the first part of a longer story, but instead feels more like another prologue.
Posted by Dave at 10:00