Judge Dredd: 'You Bet Your Life' 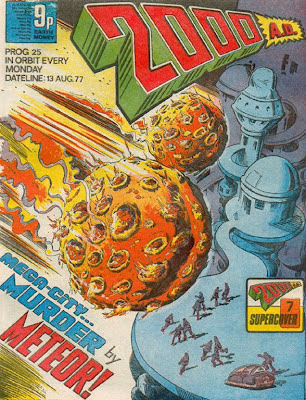 SYNOPSIS
Dredd and Walter attempt to bring a fatal gameshow to an end.

INFORMATION
PiraTeeVee is one of Mega-City One's many illegal pirate TV stations broadcasting from secret studios. One of their shows You Bet Your Life, a quiz show presented by Baby Bob Nicely and Morticia in which contestants risk their lives for cash prizes. In one round, a correct answer to a question would win 10,000 credits, while an incorrect answer earns the contestant a forfeit. Another round sees a contestant offered a choice between the same sum or a prize in a mystery box. The finale is the sudden death question and a correct answer would win one million credits. The questions either come with incorrect clues or are entirely made up.

There were at least 53 Presidents of the United States. President Bates wasn't the 53rd.

There is a plutonium mine in mutant-land.

JUDGE DREDD
He catches Walter watching illegal broadcasts, but lets him off with a warning. He and Walter track the signals to the studio where You Bet Your Life is being filmed and brings it to an end.

WALTER THE WOBOT
He watches illegal broadcasts on his own screen, but Dredd lets him off with a warning. He can track signals to a specific location and has telescopic arms. He may be largely made of tin. 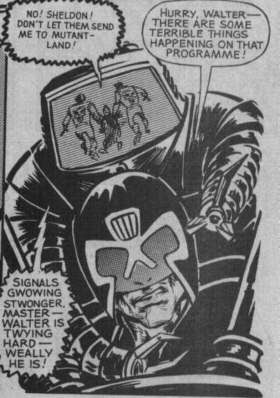 OTHER CHARACTERS
BABY BOB NICELY
He presents You Bet Your Life on PiraTeeVee, with Morticia.

DEATHS
At least three. Penny Weedy is bitten by a poisonous spider hidden in the mystery box. Baby Bob Nicely and Morticia are both killed by shards of the guillotine blade. To be fair to Grandma she might still be alive.

WORST LINES
All of Dredd's dialogue on the last page.

At one point, Baby Bob Nicely says "Good game! Good game!" which was one of Bruce Forsyth's many catchphrases.

Dredd chalks up another "Stomm!"

INFLUENCES & REFERENCES
You Bet Your Life was the name of an actual game show presented by Groucho Marx on radio in 1947, which transferred to television in 1950. Morticia's name obviously comes from The Addams Family (1964). This strip was presumably also inspired by pirate radio in general.

MISTAKES
Mega-City One is described as being a "vast metropolis of the 22nd Century", which of course it will be, but not for another two years.

REVIEW
I like the concept and it's nice to Dredd and Walter working together, but the gameshow itself is a great idea that doesn't quite deliver and the events of the last page ought to take place over a couple of seconds, but because of the dialogue it feels as though it slows everything right down. 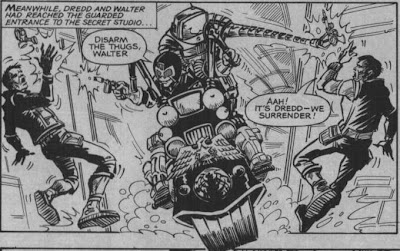