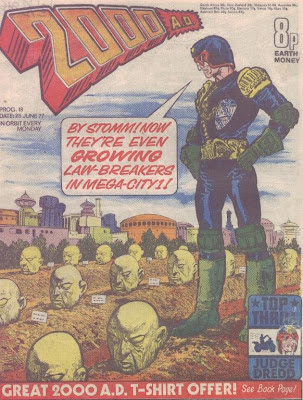 This prog featured Invasion, Dan Dare, Flesh, Harlem Heroes and M.A.C.H.1 strips, and bore not just a Judge Dredd cover, but a 'Brainblooms' cover by Don Lawrence, which was controversially overlaid with an image of Dredd by Carlos Ezquerra.

SYNOPSIS
Dredd is on the trail of a horticultural criminal growing bizarre illegal plants.

INFORMATION
The year is 2099 A.D. (and set at some before 11.9.2099, but we don't know if that is the British calendar 11th of September 2099 or the American November 9th 2099, to be be fair we don't know that the calendar hasn't changed completely, introduced new months, discarded old ones and that it isn't the 34th of Megtober).

Brainblooms are the result of bio-organic grafting of plant and human. They grow in a similar fashion to flowers. Due of the nature of what they are fed on, their sale is in violation of Section 12 of Mega-City One's Bio-Penal Code and the penalty is closure of premises for a determined period. Brainblooms can imitate any known sound and among the songs they have been taught to sing are: 'Happy Birthday To You', 'O Sole Mio', 'You'll Never Walk Alone', a song containing the lyric: "Me and my inter stella fella- We don't let Venus come between us" and 'The Humming Song' which is a euphemism for a form of hypnotic suggestion.

Judges have riot squads armed with a foam, which hardens around a disturbance. The Judges conduct a series of lightning raids at places across Mega-City One suspected of owning a Brainbloom.

Tower house, in Mega-City One, has a roof garden.

It would seem that human lifespans have lengthened and it's not unheard of for a hundred year old to be fit, healthy and active, but human life expectancy probably doesn't stretch to two hundred.

JUDGE DREDD
It's his birthday (his birthday is at some before 11.9.2099, see INFORMATION above), and Maria has bought him a Brainbloom.

He tracks down Mrs Mahaffy's Brainbloom growing operation and she hypnotises him to forget all about it and commit suicide. He tries to crash his Lawmaster (at least his third so far), but the oncoming traffic swerves and he survives. The near-death experience seems to snap him out of his hypnotised state and he returns to her garden to arrest her. 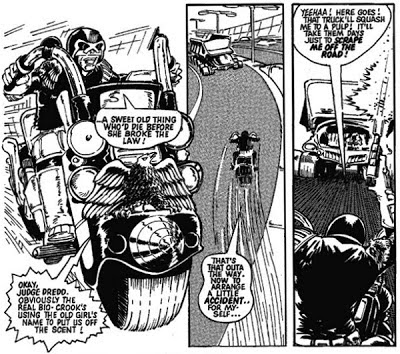 OTHER CHARACTERS
MARIA
Dredd's landlady (she's done well for herself, maybe she bought Dredd's flat from the previous owner). She has committed a crime in buying a Brainbloom, but Dredd lets her off with a warning.

WALTER THE WOBOT
He is still living with Dredd. He doesn't like Maria and would like to have seen her arrested for possession of a Brainbloom.

MRS MAHAFFY
Born in 1999, Mrs Mahaffy is now a hundred years old. She is a notorious bio-criminal, known as Green Fingers Ma Mahaffy. She grows Brainblooms for sale and has trained them to emit a hypnotic noise that renders people suggestible.

ARRESTS
At least one: Mrs Mahaffy. It's not clear if those featured in the lightning raids panel were arrested or simply had their Brainblooms confiscated. Since Dredd let Maria off, it would be hypocritical of him not to extend them the same courtesy, but there are other Judges involved here as well. 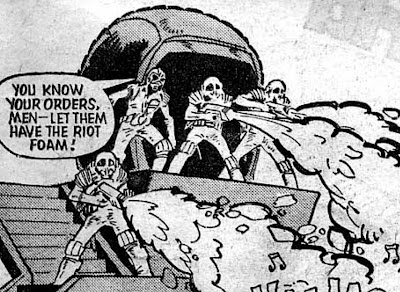 DEATHS
None. The Brainblooms are probably destroyed.

BEST LINES
Dredd: "That's that outa the way. Now to arrange a little accident..for myself..."

The fact that Dredd's hypnosis is more sinister than merely to avoid detection is nicely revealed.

WORST LINES
Dredd: "If you had any real brains, Ma, you'd know that crime doesn't pay. But I guess you'll never learn- If you live to be two hundred!"

CONTINUITY & CROSSOVERS
Another criminal identified by their voice print, introduced in Judge Dredd: 'The New You'.

INFLUENCES & REFERENCES
Despite their obvious differences, the sentient plants here put me in mind of the Ents of Middle Earth introduced in The Lord Of The Rings book The Two Towers (1954).

MISTAKES
Mrs Mahaffy is a "notorious bio-criminal", apparently operating under her own name.

NOTES
Dredd and Mahaffy both allude to the Brainblooms being fed on something ominous, but we don't find out what it is.

REVIEW
Any story would seem a little lightweight after the eight-part 'Robot Wars', and at times 'Brainblooms' does, but it's a nice little story with a brilliantly surreal idea at its core and exactly the type of bizarreness that Mega-City One will embrace later.

(Sadly Dredd Alert is not available to readers inside stars at all.)
Posted by Dave at 10:00