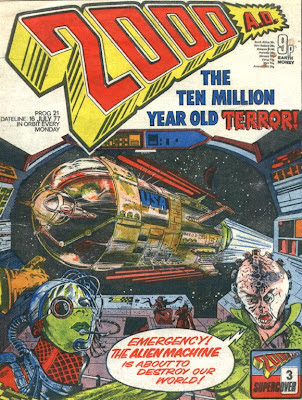 NAME
Judge Dredd: 'The Solar Sniper'
(according to The Dredd Files in Megazine 214, this strip is also known as 'Gorilla')

This Prog was the first to cost 9 pence Earth money and featured another supercover this time by Trevor Goring and Kevin O'Neill as well as Invasion, Dan Dare, Harlem Heroes, M.A.C.H.1 also Shako strips.

SYNOPSIS
Judge Dredd is the target of a killer with a solar powered weapon.

In Mega-City One, violence could be said to have reached epidemic proportions. The British date structure of day, month, year seems to have been adopted in Mega-City One. The city's Weather Congress building is the ground station for Mega-City Atmosphere Control. It also has research rooms and houses the Sunprobe 9 launch pad. The citizens vote for the weather they would like to receive.

The Department of Grand Judges can order a weather warrant to specify a specific type of weather and therefore override the voting of citizens. Named Judges: Judge Abel, Judge Baker and Judge Carter (all deceased).

Sunprobe 9 is a space mission designed to leave Earth for a three year orbit of the Sun. The probe was designed to carry a single chimpanzee passenger aboard as part of an experiment to prove the viability of manned weather station in orbit of the sun. The launch process is entirely automated and a human (ironically named Gorilla) accidentally found himself inside and was launched into orbit. Sunprobe 9 is due to return in 2102.

A solar gun is powered by the sun's rays and capable of incinerating a tank.

JUDGE DREDD
He is targeted by an assassin called Gorilla who has been killing Judges with a distinctive solar-powered gun. He visits the weather congress building and arranges for a cloud to obscure the sun and render the gun useless.

OTHER CHARACTERS
THE GRAND JUDGE
His office is officially called the Department of Grand Judges. He visits the scene of Judge Carter's murder and writes Dredd a weather warrant.

WALTER THE WOBOT
He was given a note threatening Dredd's life.

GORILLA
He regards himself as the best hit man in Mega-City One. He is killing Judges in alphabetical order with a solar gun. He accidentally finds himself inside the capsule of Sunprobe 9 as it blasts off for a three year orbit of the sun. 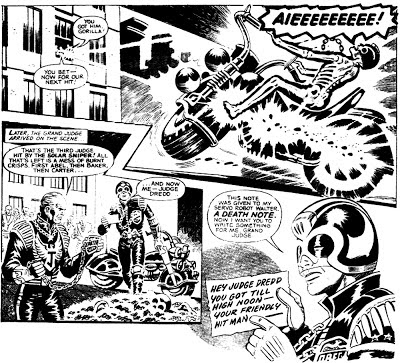 WORST LINES
Dredd: "No way to get you back, Gorilla. Sunprobe's are fully automatic - You killed by the sun and now you're gonna get the worst case of sunburn ever!"

RETROSPECT
Obviously the use of monkeys in space exploration was at its peak during the 1950's and 60's, but the practice went on much longer. To date the USA sent its last monkey into space in 1985, while the Russians continued to use them until 1997.

REVIEW
An assassin on Dredd's trail recalls 'Judge Whitey', and really needed to be a bit more exciting here. Sadly, storywise this strip is something and nothing. The artwork in the panel depicting Judge Carter's death is very impressive, but overall the artwork doesn't elevate the story.