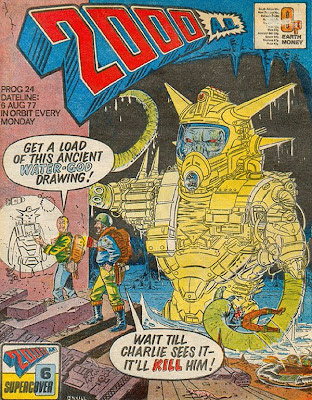 NAME
Judge Dredd: 'The Wreath Murders'
(according to The Dredd Files in Megazine 214, this strip is also known as 'Axe Killers')

This prog also Invasion, Harlem Heroes, M.A.C.H.1, Shako and Tharg The Mighty strips and a supercover by Kevin O'Neill.

SYNOPSIS
A rash of grisly murders occur in Mega-City One with a wreath left at the scene, Dredd is on the trail of the killers.

Mega-City One has at least forty highways. Highway 40 heads toward Old People's District. Residential properties have door view screens to enable inhabitants to see who is at the door without opening it. There have been at least twenty murders attributed to the floral wreath murderers and Ambulance 4-2X removed the bodies from the scene each time.

Justice H.Q. is adorned with JHQ in huge letters. The Judge's Central Computer is Macro-Analysis Computer (or M.A.C. for short). Lawgivers are programmed only to fire when they accept the hand print of a specific individual. If anyone else attempts to fire the gun it would engage the self-destruct mechanism instead.

JUDGE DREDD
He has apparently never given the citizens of Mega-City One a reason to doubt him. He uses M.A.C. to link the murders to the Auto-Medic Med-Techs of Ambulance 4-2X and then tracks them down.

DEATHS
Dredd kills one murderous med-tech with the other's axe, while the other is killed in the explosion of Dredd's self-destructing Lawgiver. 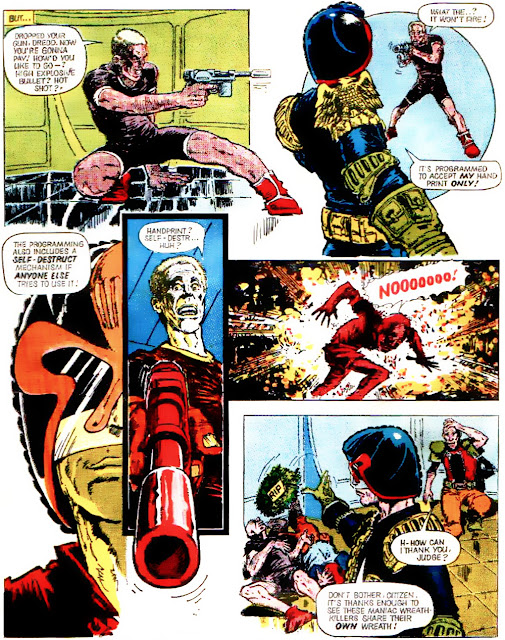 WORST LINES
M.A.C.: "Pal? What is pal? Do not have sufficient data...Please programme data..."

MISTAKES
A Judge's Lawgivers require a specific hand print to fire, but Judges all wear gloves.

RETROSPECT
Dredd uses a Mac computer in a strip printed six years before they were available to buy.

REVIEW
Fantastic. This strip feels like a real turning point. The reveal that the Med-Techs are using their position to commit burglary and murder is shocking and shows an increased depth of characterisation and depravity. There is something quite nice about the wreath as a calling card almost being more shocking to the citizens of Mega-City One than the murders themselves.
Posted by Dave at 10:00