Judge Dredd: 'The Brotherhood Of Darkness' 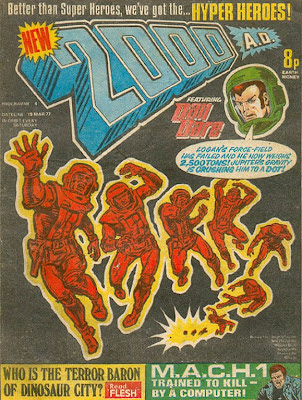 This strip appeared in a Prog with a Dan Dare cover (by either Carlos Ezquerra or Mike Dorey, according to Barney there is some confusion), a Flesh Futuregraph advert and Invasion, Dan Dare, Flesh, Harlem Heroes, M.A.C.H. 1 strips.

SYNOPSIS
Dredd foils a mutant attack, but not before they have kidnapped the mayor's son. Dredd infiltrates their group, ventures out of the city, frees the captives and returns them to Mega-City One.

INFORMATION
Some time ago, the Atomic Wars turned the area outside Mega-City One into a wasteland.

The Brotherhood of Darkness are mutants from the wilderness from the atomic wars outside Mega-City One. Their eyes have been affected and they can only see in the dark. They come into the city to loot and kidnap people for use as slaves. They have at least four trucks and are armed with a mix of crossbows, shotguns and machine guns. Among the other mutated creatures in the atomic wilderness is a man-eating praying mantis, which is forty metres tall. The Brotherhood of Darkness cook and eat it.

Mega-City One has a mayor. The mayor has a son who is kidnapped by the Brotherhood of Darkness and return by Dredd. Lawbreakers caught speeding receive a ticket. Controllers at Justice H.Q. monitor the feed from the city's cameras. The headlights on a Lawmaster bike are very bright on full beam. The Judge's gun can fire flares.

JUDGE DREDD
He essentially fends off an attack by an army of mutants singlehandedly and says he prefers fighting mutants to handing out speeding tickets. He infiltrates the Brotherhood of Darkness, but doesn't take off his helmet even when trying to maintain a disguise. Dredd frees the mayor's son and the other kidnap victims. He uses the headlights on his Lawmaster to blind the Brotherhood and escape. He leads a convoy of vehicles back to Mega-City One.

OTHER CHARACTERS
THE MAYOR'S SON
He helps Dredd to free the other kidnapped citizens and rides on the back of the Lawmaster.

DEATHS
Seven. There is a guy with a very fatal arrow sticking out of his neck on the first page. Dredd kills at least two mutant brothers during their attack on Mega-City One, and presumably the three guards Dredd that eliminates are eliminated permanently. The Brotherhood kill and eat the mutant mantis.

BEST LINES
Dredd: "No questions, kid. Just help me free the others, then stick to me like a string vest!"

MISTAKES
One panel shows an undercover Dredd requesting the help of the least observant member of the Brotherhood to get a Judge's Lawmaster Bike onto the truck, whilst the Judge struggles to keep his hood on. 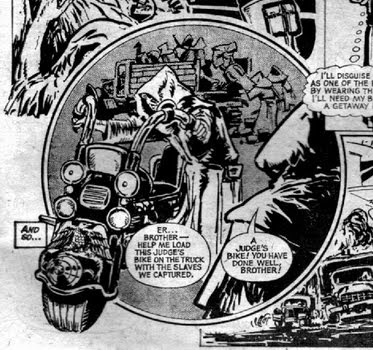 It stretches credulity a bit far.

RETROSPECT
The mutants and the Cursed Earth will play a big part in the storylines to come...

NOTES
If Mega-City One is as large as the Futuregraph stated and the surounded by atomic wasteland, presumably the Brotherhood attack somewhere near the city limits to the west, north or south of the city. Therefore Dredd is not in the section of the city which was once New York. Maybe he has been transferred.

Malcolm Shaw wrote the next three Judge Dredd strips, 'The Wreath Murders' for Prog #24 and 'Videophones' for the 2000 A.D. Annual 1978. He also wrote Return To Armageddon (starting in Prog #185) and two strips of The Collector for the Eagle. 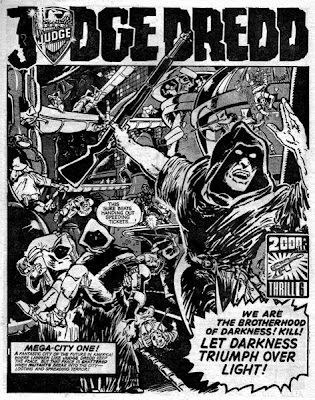 It's interesting that this is only the third Judge Dredd strip and we are already venturing outside the city. I suppose it provides a very good reason to stay within the city boundaries and it's great to see Dredd's world expand.

This is arguably the first strip in which Dredd isn't overshadowed by another character and the result is a far more emotional Dredd. He is visibly enjoying slaying mutants at the beginning and showing revulsion at the Mantis meal. In earlier (and many later) strips he wouldn't admit to such feelings.

The artwork is wonderful, particularly the first splash page (left), but sometimes seeing Dredd's helmet under his hood does look more than a little bit silly.