NAME
Harlem Heroes, Part 18 (according to Wikipedia, this is the third part of a story also known as 'Gorgon's Gargoyles')

INFORMATION
Gorgon's Gargoyles refer to their technicians as "Jigsaw Docs".

GIANT
He loses concentration during the blast-off and the ball hits him in the shoulder, knocking him out of Gruber's reach.

SLIM
He scores an air-strike.

ZACK
He scores an air-strike.

OTHER CHARACTERS
CHICO
The Harlem Heroes' number 6. He is pushed into the path of the ball by Artie Gruber. It hits him squarely in the face and knocks him into the score-tank. He is electrocuted and killed. 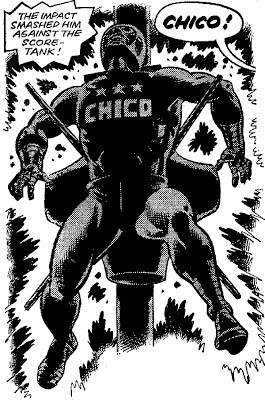 ARTIE GRUBER
Artie attempts to slash Giant with his claws, but misses and accidentally gets Pretty Boy Floyd. Then he pushes Chico into the path of the ball which results in his death. He attaches an explosive limpet device to the ball and throws it to Giant.

PRETTY BOY FLOYD
He is slashed acrosssed the chest with Artie's claws, his internal electronics are damaged and he falls to the runway. (the commentator implies that he is beyond repair)

BEAUTY-PACK BENSON
He kicks the long-range shot which ultimately hits Chico in the face.

DEATHS
Two. Pretty Boy Floyd, his "electronic guts" are slashed by Artie Gruber's claws (Slim implies he can be fixed, while the commentator suggests he can't). Chico, electrocuted by Gruber.

BEST LINES
Commentator (as Gruber throws a ball carrying his explosive limpet device): "What a lousy pass! Ugly Mugglies thrown it straight at Giant--It's a gift!"

WORST LINES
Umpire (preventing a fight after Chico's death): "Hold it, you two! Aeroball's no different from other high-risk sports, like motor racing! Accidents happen!"

MISTAKES
Not necessarily a mistake but as I've pointed out under Deaths (above) that Slim and the commentator provide contradictory information about Pretty Boy Floyd. It would be nice to know one way or the other.

REVIEW
This part finally ups the ante after a few that stalled. We've established that aeroball is a tough old game, but to play on after two deaths is absolutely bloody heartless and a bit brilliant as well.

Can The Heroes Prove Their Fame? Don't Miss Next Week's Thrilling Game?
Posted by Dave at 10:00