NAME
Harlem Heroes, Part 2 (according to Wikipedia, this is the first part of a strip also known as The Baltimore Bulls)

SYNOPSIS
Giant, Slim and Hairy try to put the Harlem Heroes back together.

INFORMATION
An aeroball is silver. There is an amateur Aeroball stadium 500 feet up on Street Level Nine in the slum area of Harlem. The players use either low power jet packs or illegal home made ones powered by alcohol. Ten young people have been killed using them in the last year.

Before the crash, the Harlem Heroes lent two players to the Seattle Swifts. The Harlem Heroes first round match is against the Baltimore Bulls. Sixty million televiewers watch the game. Named players: Conrad King, Zack Harper, Chico and Sammy.

GIANT
He was discovered in the sky-slums of Harlem. Giant saves Zack's life when his jet pack overheats.

HAIRY
He was discovered in the sky-slums of Harlem. He injured his hand in the crash, but it has healed now.

OTHER CHARACTERS
CONRAD KING
He is a forty year old aeroball veteran who played for the Harlem Heroes, but was forced to retire due to injury. Conrad broke his right hip three times, but has now received a bonegraft and can play again. (If he is exactly forty and if the year is 2050, then he was born in 2010).

ZACK HARPER
He is involved with street gangs, has been in trouble with the police and his father is currently in prison for armed robbery. Zack gatecrashes aeroball games at the amateur stadium in the slum area on street level nine in Harlem. Giant saves his life when his jet pack overheats and he loses control. 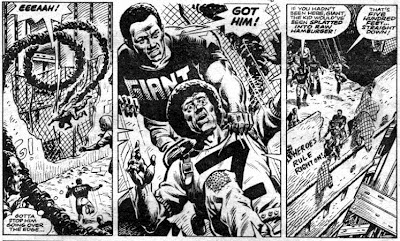 CHICO & SAMMY
Two Harlem Heroes reserves who were lent to the Seattle Swifts, but requested a return transfer when they heard about the crash that killed their former teammates.

INFLUENCES
Zack mentions Superman (1938), which is an odd reference for him to make since flying people should be fairly commonplace as far as he is concerned.

REVIEW
Stories that involve "getting the band back together" usually require you to care about the band in the first place or at least more than the individuals involved. The additions of a veteran or a punk kid are well worn tropes, but both work well here albeit at the expense of learning anything new about Slim or Hairy. Tom Tully is evidentally at his best describing and depicting game action and this strip suffers slightly, but the effort going into the worldbuilding and the art is absolutely fantastic throughout.
Posted by Dave at 10:00