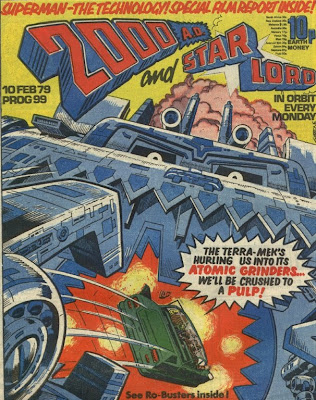 This strip was featured with Angel, Judge Dredd and Ro-Busters strips, a Futuregraph and a Ro-Busters cover by Dave Gibbons.

INFORMATION
Nothosaurs are not normally flesh-eaters, but man's activity seems to have altered this.

Atlantis Station's time travel facility uses a time control crystal. The facility was used to return the base to the 23rd Century, but it was lost in time. Deposited over the sea of another age, it sank and causes rumours of the sunken city of Atlantis.

OTHER CHARACTERS
PETERS
He saves Carver's life. Peters dives to reach the base's time controls and successfully returns Atlantis Station to the 23rd Century. He is killed by a Giant Scorpion.

BIG HUNGRY
He kills Carver. He is pulled off the deck of Atlantis Station as it is transported back to the 23rd Century and into the time lanes. He was deposited into Loch Ness.

J.M. GROSE
He abandoned his post and is left behind as the base is transported back to the 23rd Century.

BEST LINES
Peters: "Get down, Carver - Unless you want you head shaved...The hard way!"

WORST LINES
Scorpion Victim: "No - Not the pincers! Noooooo!"

INFLUENCES & REFERENCES
The earliest report of a monster associated with Loch Ness appears in a 7th century account of the life of St. Columba, but the fashion for modern sightings seem to stem from 1933.

Atlantis is first mentioned in Plato's dialogues Timaeus and Critias, written circa 360 BC, described as a naval power that conquered many parts of Western Europe and Africa in the 10th millennium BC, but sank into the ocean "in a single day and night of misfortune" after a failed attempt to invade Athens.

REVIEW
Book 2 comes to an impressive conclusion. Peters' epic dive, Grose's marooning and the revelation about Nessie are all brilliant, but Carver's death seems rushed.