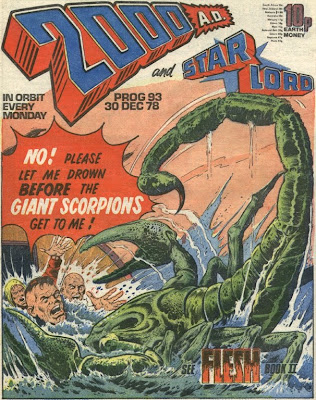 After a longer than usual gap the last prog of 1978 arrived containing this strip as well as Judge Dredd, Tharg's Future Shocks, Ro-Busters and Strontium Dog and a Flesh cover by Massimo Belardinelli.

SYNOPSIS
The crew of Thor's Hammer drown or end up as scorpion food, except Peters and Gunner Ben.

INFORMATION
Thor's Hammer sinks and the loss means a 12.5% reduction in Schedule B for shipping fish to the 23rd century.

CLAW CARVER
He has returned to Atlantis Station and told Grose his version of events.

OTHER CHARACTERS
PETERS
He kills his jailers and free himself from the brig. He almost evacuates with the rest of the crew aboard Thor's Hammer, but returns when he sees Gunner Ben is left behind. He is almost scorpion food, but the giant arachnid is distracted by the sinking of Thor's Hammer. He and Ben build a raft and escape.

GUNNER BEN
He is abandoned by his crewmates as Thor's Hammer departs Svenson's Island, but Peters goes back for him. He and Peters build a raft and escape.

DEATHS
Several. Peters throttles his jailer with his thighs, and probably kills another with the laser lash. Thor's Hammer holes out and sinks leaving its crew to drown or be eaten by giant scorpions.

BEST LINES
Grose: "Hard work, Carver - It'll do 'em good. It made me what I am today!"
Carver: "I wondered what had done it, Mr Grose, sir!"

WORST LINES
Peters (whilst whipping a crewmate with a laser lash): "This isn't what I meant by whipping up support - but it'll do!"

REVIEW
This largely Clawless part was a surprise, but Peters comes to fore and the strip gets a new direction. The aerial view of the Thor's Hammer is great, but it's a shame it gets holed between panels.