SYNOPSIS
Walter gets abducted by a bodysnatcher.

INFORMATION
Lunar City has a morgue.

The 3 Widdle Pigs is a children's book.

Robots are reputed to be unbeatable at chess.

WALTER THE WOBOT
He plays chess with Dredd and lets him win. He encounters Igor struggling with a heavy load outside the Lunar Morgue and helps him carry it. When it is revealed to be a corpse, Igor abducts Walter.

OTHER CHARACTERS
JUDGE DREDD
He plays chess with Walter and wins every time. Porridge is his favourite breakfast meal.

YGOR
He steals a body form the Lunar Morgue and kidnaps Walter when he attempts to help. 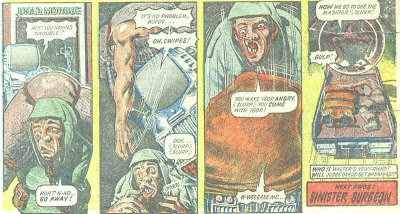 WORST LINES
Walter: "Weading you a bedtime stowy, Judge Dwedd!"
Dredd: "How kind. Now why don't you do something useful - like disappear."

CONTINUITY & CROSSOVERS
This strip is set during Walter's time on Lunar 1 and so before the accompanying Judge Dredd: Return To Mega-City.

REVIEW
Walter's adventures take an interesting twist here. Dredd is depicted in quite an enigmatic way and the panel of Walter shown from above is very nice indeed.

Next Prog: Sinister Surgeon
Posted by Dave at 10:00