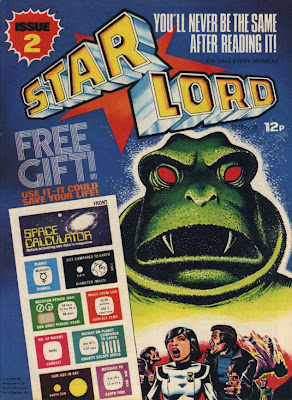 This issue of Starlord also featured Strontium Dog, Timequake, Mind Wars and Planet Of The Damned strips, a Space Calculator free gift and a Timequake cover by Brian Bolland.

SYNOPSIS
The US Army contracts Ro-Busters to counteract the effects of a gas that sends biological organisms mad.

INFORMATION
Ro-Busters base is on Devil's Island, twenty eight miles off the coast of South America. They have a robo-pound. The Preying Mantis is a multi-role rescue vehicle. The front section is a heavily armed fighter, the mid section is a field operations centre and the rear is a space/sea rescue craft. A pod underneath carries purpose-built equipment and robots for various disasters. 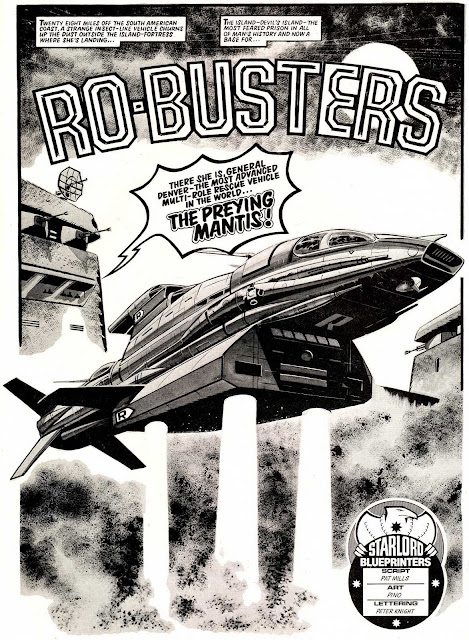 A Lazooka is a weapon of war.

During the 20th century the USA experimented with a gas, a red mist, that sent people insane. It was deemed too dangerous and dumped into the sea. The gas is now escaping and driving the people and animals of Florida mad. Ro-Busters are engaged to solve the problem as they will be unaffected by the gas.

RO-JAWS
He is considered a Grade 2 robot as far as intelligence is concerned. His courtesy-obedience circuits are incomplete.

HAMMER-STEIN
He is considered a Grade 2 robot as far as intelligence is concerned. He lost count of how many humans he killed in the war, but admits it could be thousands. He lost his first head in the war, it was shot off by a human soldier with a lazooka.

OTHER CHARACTERS
HOWARD QUARTZ
He is attempting to do business with the Pentagon.

GENERAL DENVER
A three star general in the US Army. He represents the Pentagon in its dealings with Quartz.

MEK-QUAKE
He didn't fight in the war.

DEATHS
One. Hammer-Stein strangles a human soldier in flashback.

BEST LINES
Quartz: "I can offer you special cut price rates...ten per cent off for germ warfare disasters...Five per cent for atomic explosions..."

American Woman: "He is odd...but rather cute!"
Ro-Jaws: "Thank you, Mister! Would you like to buy me!"

INFLUENCES & REFERENCES
Ro-Jaws asks Hammer-Stein about his war experiences in a manner very like that of a 1915 British World War I propaganda poster, "Daddy, What Did YOU Do In The Great War?", by Savile Lumley.

The Preying Mantis is very similar to Thunderbird 2 and the disaster recalls the Thunderbirds episode Attack Of The Alligators!. 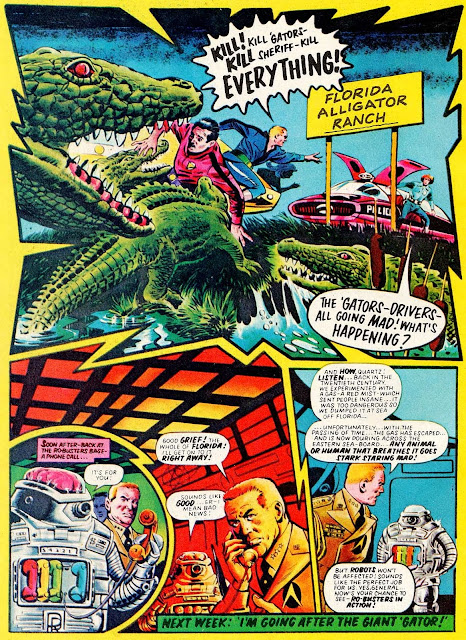 REVIEW
The opening Preying Mantis sequence is incredibly dull, but the flashback and the interaction between Ro-Jaws and Hammer-Stein are great.