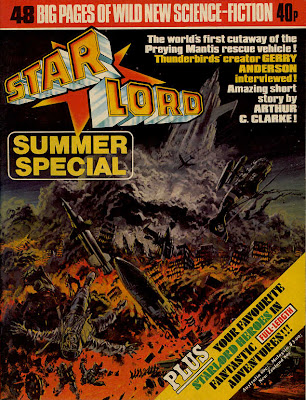 SYNOPSIS
Ro-Busters come to the rescue of a crashed train and discover an unexploded bomb.

FIRSTS & LASTS
First appearance of Ro-Busters in a publication other than Starlord itself.

INFORMATION
(This strip is set in June 2078)

The rocket-powered Rapid Transport System (RTS) travels at ten times the speed of sound through a magnetically controlled vacuum tunnel. The RTS can cross the USA in under 70 minutes. The main terminal station is in San Francisco. Earthquake Control teams prevent seismic activity and explode a robotic nuclear device every five years to relieve the pressure on the San Andreas fault. 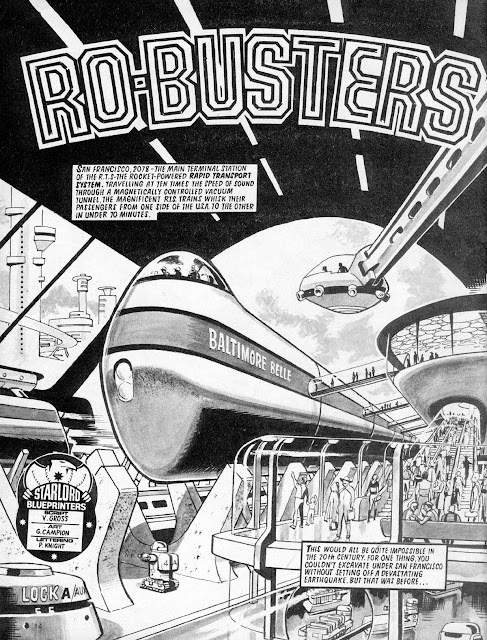 There is a Robot Olympics.

RO-JAWS
He can be equipped with a fire extinguisher arm. He has to tow Hammer-Stein out of the tunnel.

HAMMER-STEIN
He seals EBC 15 into the tunnel where it explodes. He is buried in wreckage and Ro-Jaws has to tow him out.

OTHER CHARACTERS
ECB 15
Small Robotic half megaton Nuclear Device used by Earthquake Control. Programmed to detonate at Grid Reference 09143 Alpha, but suffers damage and believes its target to be Grid Reference 94130 Beta. It tunnels into the RTS and the path of the Baltimore Belle. The loss of vacuum causes the Baltimore Belle to crash. He has a twenty minute countdown. He detonates, but Hammer-Stein manages to seal in the explosion.

MISS MARILYN
She presses the button that scrambles Ro-Busters.

MEK-QUAKE
He has a towing hook and used it to pull a submarine once. Mek-Quake tunnels through the wreckage at the Baltimore Belle crash site, tows out the children and is hailed as a hero.

METAL ANGEL
She can be accompanied by up to 25 little robots called sniffers who are designed to track down buried survivors. 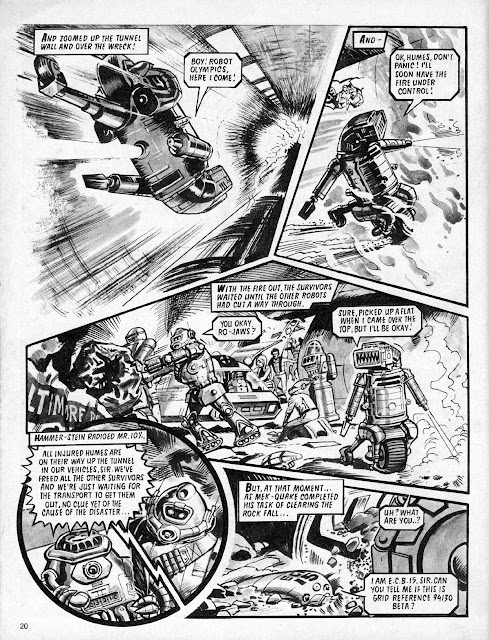 Hammer-Stein (whilst being towed face down): "This is most undignified, Ro-Jaws. What is there are reporters at the station?" 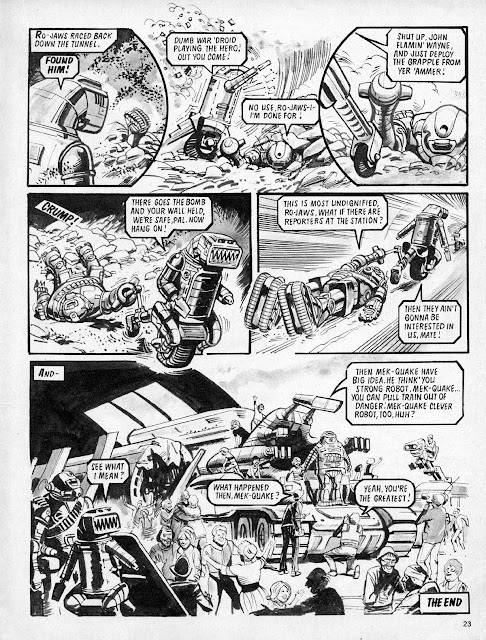 REVIEW
A nice little story which again shows the interaction between Ro-Jaws and Hammer-Stein well and the pace is surprisingly good at ten pages.