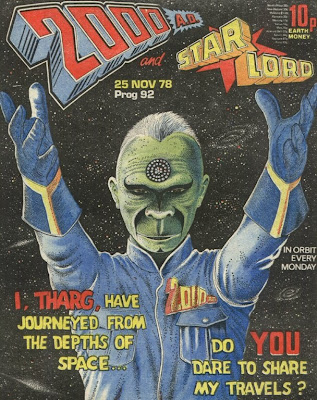 This prog bore a cover by Colin Wyatt featuring Tharg The Mighty and his apparently talking armpits. This strip sat alongside Judge Dredd, Ro-Busters and Strontium Dog.

SYNOPSIS
Carver uses the arrival of time travelling tourists as an opportunity to retrieve his gold, only to discover that it's gone.

FIRSTS & LASTS
First appearance of the Time travelling tourists and the Giant Scorpions.

INFORMATION
There are Giant Scorpions in an underwater cave on Svenson's Island.

CLAW CARVER
He takes charge of the latest group of tourists and uses the opportunity to return to Big Hungry's cave. He discovers that his hoard of gold has gone.

BEST LINES
Trans-Time Employee #1: "Placodus been hauled up with the catch, but the Cybosaur will get rid of him!"
Trans-Time Employee #2: "Aye, genetic engineering may have turned the Cybo into a good line of defence - ...but me, I always reckons you can't beat a good old boat-hook with a sharp point!"

WORST LINES
Tourist: "Th-that ride was r-rather rough, I hope we've done the right thing coming on this trip!"
Chief: "Of course you have, sucker - er - friend! Welcome to your sunshine holiday!"

INFLUENCES & REFERENCES
Placodus was a genus of marine reptile which swam in the shallow seas of the middle Triassic period, circa 240 million years ago.

MISTAKES
The opening caption implies the Triassic was only twenty-five million years ago, which is out by a factor of ten.

REVIEW
The art is great and the tourists are brilliantly brash, but it does feel like it is in danger of repeating Book 1. The arrival of Giant Arachnids in the cliffhanger does nothing to alter that.