NAME
Judge Dredd: Bring Me The Head Of Judge Dredd

SYNOPSIS
As the Judges search for Dredd, he searches for a robot replacement to prove his innocence.

FIRSTS & LASTS
The first revelation that the other Dredd is a robot.

Moderna Robots have a facility in Mega-City One, they build robots and have a largely robot workforce.

JUDGE DREDD
He is still missing and the resulting manhunt is the biggest in Mega-City history. He seeks out Max Normal for help and on his suggestion Dredd investigates Moderna Robots. He fights and destroys the Dredd robot, but uses its head to prove his innocence.

DEPUTY CHIEF JUDGE CAL
He has designs on the job of Chief Judge.

MAX NORMAL
He informs Dredd of Chick Parker at Moderna Robots and suggests he may have built a robot Dredd. 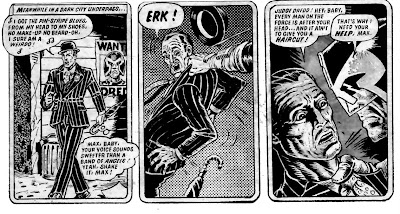 CHICK PARKER
An engineer at Moderna Robots with gambling debts which he managed to pay off last week. He designed the Dredd robot. Parker was murdered in his office at work.

THE DREDD ROBOT
It is with information on Dredd from his file at Justice Central. It fights Dredd at Moderna Robots, but the Judge destroys it with an industrial scrap magnet and furnace. Only the head it retrieved.

DEATHS
Two. Chick Parker has been shot dead. Dredd destroys the Dredd robot with an industrial scrap magnet and furnace.

INFLUENCES & REFERENCES
Bring Me The Head Of Alfredo Garcia was a 1974 film directed by Sam Peckinpah.

REVIEW
It's great to see Dredd back on form and both the art and the script are fantastic here.