SYNOPSIS
A look inside the Preying Mantis.

INFORMATION
The Preying Mantis is divided into four sections: the Nose Section, the Command Module, the Engine Sub-Module and the Rear Section.

The main engine bank is kept within the Engine Sub-Module, each fan is rated at 60,000lb thrust and is equipped with its own individual nuclear generator. The commander and navigator droid are also assigned to this section.

The Rear Section boasts another pilot droid, robot quarters (which are also used as a briefing room) that holds fifty robots. The overseer robot has private quarters. The Rear section also features the main nuclear powered Scramjet engine, a robot repair room and decontamination chamber. This section serves as a Sea/Space Module.

The Plague Pod is one of several possible pods that the Preying Mantis can carry. It contains a riot/assault ambulance with armaments, two hover ambulances and engine equipment with provides power to the thrusters. 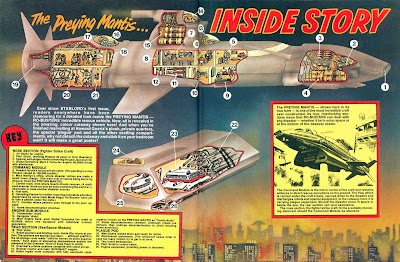 OTHER CHARACTERS
METAL ANGEL
Ro-Busters have never lost a patient under the knife in her operating theatre.

MEK-QUAKE
He can be carried in the Plague Pod.

REVIEW
I love a cutaway diagram, but this is a bit dull.
Posted by Dave at 10:00