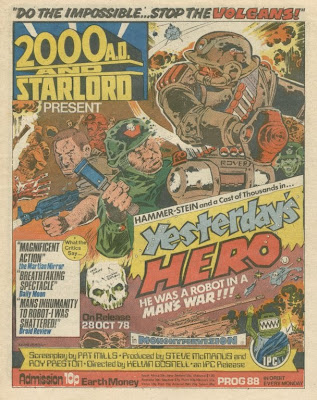 This strip appeared alongside Judge Dredd, Tharg's Future Shocks, Ro-Busters and Strontium Dog, and a Ro-Busters cover by Kevin O'Neill.

SYNOPSIS
Claw Carver gets settled in. Big Hungry goes in search of revenge.

The Atlantis Station is the largest man-made structure ever built on Earth. Its facilities include a sick bay, a dock for Hunter Killer Submarines and a canteen. Among the dishes available in the crew mess is shark and seafood, Northosaur stew and dinosaur delight with cold custard. The station's controller can award extra pay for bravery.

'CLAW' CARVER
He works on the processing line and in order to impress Grose kills a shark that had attacked another employee. He is awarded with an extra month's pay, but he rejects it in favour of a transfer to a Svenson's Hunter Killer submarine as a gunner.

OTHER CHARACTERS
CAPTAIN BULL SVENSON
He captain's a Hunter Killer submarine. He and Claw Carver fight over a particular seat in the canteen.

BIG HUNGRY
He goes in search of Carver for revenge.

DEATHS
One. Claw kills a shark.

BEST LINES
Carver: "Huh! I could get more nourishment biting my lip!"
Trans-Time Employee: "Say, that's not a bad idea!"

MISTAKES
Graffiti is misspelt Grafitti in speech. (Dessert is misspelt Desert on a canteen, but that is more likely to be deliberate).

REVIEW
This little slice of life with Claw Carver offers a change of tone, a bit of insight into the day to day running of the Atlantis Station and some great Carver action. Big Hungry still feels like a straightforward substitute for Old One Eye, but Carver makes up for it.

Next Prog: Big Hungry Bites Back!
Posted by Dave at 10:00