SYNOPSIS
Walter needs repairs, finds himself in the robo-pound and .

INFORMATION
Mega-City One has a robo-pound for abandoned robots. Robots left unclaimed after 24 hours are destroyed. 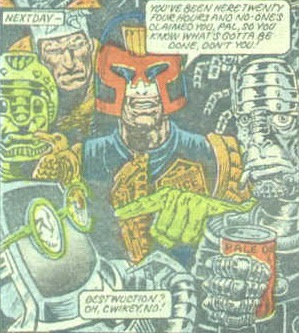 WALTER THE WOBOT
He needs to get his scanner fixed, but the required part is unavailable and he is forced to wear glasses instead. He is mistaken for Elton Droid and mobbed by fans who are disappointed when they realise his true identity and leave him in the gutter. OTHER CHARACTERS
MARIA
Walter mistakes her for a hatstand.

ELTON DROID
Spectacle wearing robot that has become a big star in Mega-City One.

MEK-QUAKE
He plans to destroy Walter.

BEST LINES
Judge: "What are you doing in the gutter, Pal? Vagrant, eh?"
Walter: "Oh no, Officer! Walter is not a vagwant, he's Judge Dwedd's servo-wobot!"
Judge: "The Cursed Earth you are! I'm taking you down to the robo-pound!"
Walter: "But you can't! I'm a fwee wobot - fwee!"

CONTINUITY & CROSSOVERS
The Judge mentions the Cursed Earth, which of course is where Dredd currently is, Walter was declared a free robot in Judge Dredd: 'Robot Wars', Part 8, while Mek-Quake crosses over from Ro-Busters. 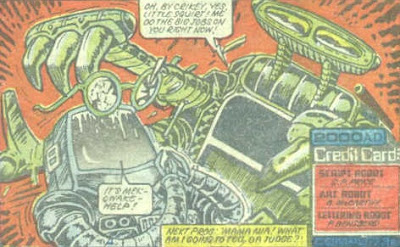 INFLUENCES & REFERENCES
Elton John (or Sir Elton Hercules John CBE) was born Reginald Kenneth Dwight and one of the most successful musical artists of all time. His hits include 'Rocket Man', 'Don't Go Breaking My Heart' with Kiki Dee, 'Saturday Night's Alright for Fighting', 'Goodbye Yellow Brick Road', the brilliantly named 'Just Like Belgium' and 'Candle In The Wind 1997', which sold over 33 million copies worldwide and is the best selling single in the history of both the UK and US Charts.

P. Bensberg might be a clue to the identity of Bennsberg.

REVIEW
Walter needs glasses. It's a very Walter premise, but this bizarre strip lurches into an Elton John parody, then homelessness before execution. To compound this, the executioner has nipped over from Starlord to do Walter in. It's astonishing that Ro-Busters, and therefore A.B.C. Warriors, owe their place in Dreddverse not to the Volgan war, Hammerstein meeting Dredd or Golgotha's parentage, but instead to Mek-Quake's appearance here.