Ro-Busters: Prologue – The Day Of The Robot 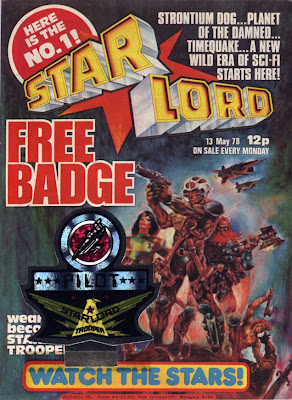 NAME
Ro-Busters: Prologue – The Day Of The Robot

SYNOPSIS
Ro-Jaws and his unnamed friend narrowly avoid destruction and are sold to Howard Quartz for his International Rescue Operation.

Robots are used to do dirty and difficult jobs, for example collecting rubbish, tending the sick, fighting wars etc. BSA, Honda and Pioneer all manufacture robots. Examples of advanced robots include War 'Droids and Federal Recycling and Environmental 'Droids 2-L (or F.R.E.D. 2-L). 'Chatterbox' Sky Spies are not advanced robots, but computer based.

Humans can have artificial body parts incorporated into their bodies and as long as the individual undergoing organ replacement remains at least ten per cent organic they are still considered legally human.

Plasto-Glass is a building material. 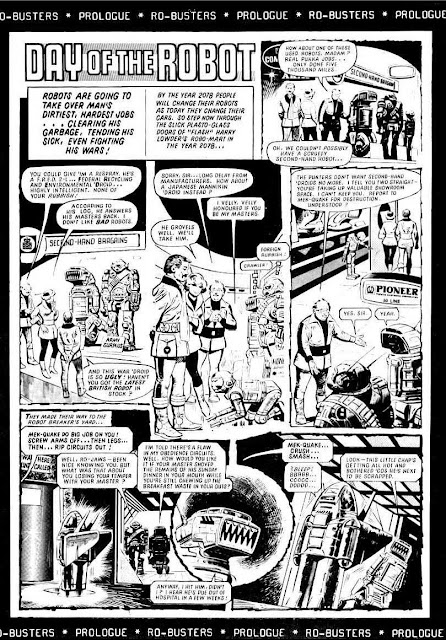 RO-JAWS
A F.R.E.D. 2-L Robot. He has only done 5,000 miles. He has a flaw in his obedience circuits. He hit his master when he tried to force food waste into him and his master was hospitalised. He is due to be destroyed by Mek-Quake, but is sold at the last moment to Howard Quartz to work in his International Rescue Operation.

AS YET UNNAMED WAR 'DROID
A war 'droid. He is due to be destroyed by Mek-Quake, but is sold at the last moment to Howard Quartz to work in his International Rescue Operation.

MEK-QUAKE
He is by his own understanding a "pretty basic robot". He is due to destroy Ro-Jaws, Hammerstein and a 'Chatterbox', but is instead sold at the last moment to Howard Quartz to work in his International Rescue Operation.

HOWARD QUARTZ
A billionaire who was afraid to die and kept having his human organs replaced. He has been nicknamed Mr. Ten Per Cent. He runs an International Rescue Operation.

WORST LINES
Japanese Mannikin 'Droid: "I velly, velly honoured if you be my masters."

CATCHPHRASES
Mek-Quake does a big job and Quartz answers a phone and says "I'm on green" (see INFLUENCES & REFERENCES).

INFLUENCES & REFERENCES
The Howard Quartz "I'm on green" telephone routine is straight out of The Fall And Rise Of Reginald Perrin (1976-1979). International Rescue is also the name of the organisation with similar goals (albeit more altruistically) from TV's Thunderbirds (1965-1966).

CREDITS
There are no credits on the strip itself, these are taken from 'The North Sea Tunnel'

Carlos Pino drew plenty of Ro-Busters for Starlord, Invasion, Flesh, Disaster 1990, Angel and Tharg's Future Shocks for 2000 A.D. as well as hundreds of Judge Dredd for the Daily Star.

REVIEW
This is a brilliant beginning. Ro-Jaws and Quartz automatically leap off the page and become instant favourites.
Posted by Dave at 10:00