INFORMATION
The Volgans are using motorbike patrols on country highways, including armed sidecars. 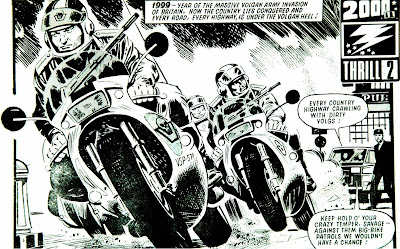 OTHER CHARACTERS
GREASER
Friend of Savage's. He runs the Black Knight Garage. The Volgans shoot him and leave him for dead. He telephones Mick and sends him to help Savage.

WORST LINES
Mick: "We're British riding British bikes, and we got somethin' to show you!"

REVIEW
Another friend of Savage's makes the supreme sacrifice, but it's good to see Savage have to deal with the consequences of his actions. Three Volgan patrols on the same road seems a little unlikely though, doesn't it?