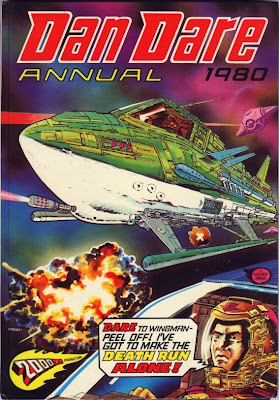 This strips appeared with plenty of Dan Dare strips and a cover by Kevin O'Neill.

SYNOPSIS
Dredd is surprised by a Christmas Party and a brawl.

INFORMATION
(This strip takes place during Christmas Day of 2099)

Luna City is sometimes referred to as Luna City One. The city has at least four Shuttle Pads and a City Jail. The Luna Hilton, Manhattan Towers and Shuttle Pad 4 are all close together. Luna-City P.D. operate as back up to the Judge-Marshall. There is an ordinance about making any kind of disturbance on any public holiday in Luna City. Christmas Day is a public holiday in Luna City.

A Lawmaster can travel upstairs.

JUDGE-MARSHAL DREDD
He lives in Manhattan Towers. Dredd has won some awards. On Christmas Day he drives past his home and sees lights on. He heads in on his Lawmaster to discover that he is receiving a surprise Christmas party. A multitude of IPC robots go on strike and Dredd and his guests fight them.

THARG & STARLORD
They attend Dredd's surprise Christmas party and Tharg offers Dredd a drink from an old Thargian recipe. They fight against the striking robots and are arrested by Dredd.

DAN DARE & THE MEKON
They attend Dredd's surprise Christmas party and Dare attempts to teach Mek-Quake Karate. His adventures are available to read. They fight against the striking robots and are arrested by Dredd.

JOHNNY ALPHA, WULF STERNHAMMER & THE GRONK
They attend Dredd's surprise Christmas party. They fight against the striking robots and are arrested by Dredd.

BILL SAVAGE
He attends Dredd's surprise Christmas party and fights against the striking robots. He is arrested by Dredd.

M.A.C.H. 0
He attends Dredd's surprise Christmas party and fights against the striking robots. He is arrested by Dredd.

O'GOSNELL
Luna-City P.D., he helps Dredd arrest himself and all his guests.

ARRESTS
Hundreds. Dredd sends everyone involved in the fight, including himself, to jail for one week.

CATCHPHRASES
Walter says cwistmas, supwise,
Tharg says Borag Thung!
Dredd says "By Stomm!" and "What the Kronj is this?"
Wulf says he is "ready as a cucumber!"

CONTINUITY & CROSSOVERS
Guests at the party include Tharg, Starlord, Johnny Alpha, Wulf Sternhammer and the Gronk from Strontium Dog, Ro-Jaws, Hammer-Stein, Howard Quartz and Mek-Quake from Ro-Busters, Dan Dare and the Mekon from Dan Dare, Bill Savage from Invasion!, Mach Zero from Mach Zero and what might be Sam Slade from Robo-Hunter.

For Dredd and Walter, this strip takes place during Dredd's tenure as Marshall of "Luna City One", specifically between Red Christmas and 22nd Century Futsie. but see MISTAKES below. Presumably Bill Savage, M.A.C.H. 0, Dan Dare and Johnny Alpha et al must use some form of time travel to get to the party, while Ro-Busters are probably still in operation 2099.

INFLUENCES & REFERENCES
Johnny Alpha, Wulf Sternhammer and the Gronk sing a song called 'Home On The Moon' to the tune of 'Home On The Range'.

MISTAKES
22nd Century Futsie saw Dredd free on New Year's Eve 2099 and this strip suggest he won't get out until January the First.

RETROSPECT
Most of the strips featured here will crossover into Judge Dredd again one way or another.

REVIEW
This is pretty awful. The characters that crossover into Dredd's world do so without much explanation and barely interact. Why was this set during Dredd's time on the Moon? What was the point?
Posted by Dave at 10:00