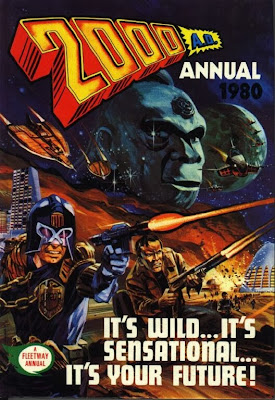 SYNOPSIS
Dredd investigates a series of robot malfunctions and in an unrelated matter Walter almost kills him.

FIRSTS & LASTS
First mentions of Mexico and the Caribbean Zone.

INFORMATION
The Mega-Rail is Mega-City One's mass transit system. Mega-Miami is a luxury spot and vacation centre at the extreme south of Mega-City One. The beach is made of sand of a silica formation unique to Mega-Miami. Beachfront technology includes the Instant techno towel booth that dries without friction, the Sand King Auto Model that makes sandcastles and a solar lamp that provides a tan in 10 seconds for 500 credits.

The Mega-Rail uses robo-guards, the sanitation department uses robot dustmen. 'Rustbacks' is a nickname given to illegally imported second rate robots. Illegally imported robot can be repaired, reprogrammed and apply to enter MC1 legally. Some robots are equipped with mini-nuke auto-destructs.

There are rowdiness and noise penal codes, but they don't apply to vacation centres. Judges have an alternate tropical uniform for warmer climes.

Sleep-Eezy squash is a sedative. Soyacoffee is beverage. Some individuals have built in poison probes.

Mexico and the Caribbean zone are nation states.

JUDGE DREDD
Following a spate of robot malfunctions and the discovery of a grain of sand from Mega-Miami, he heads there to investigate and takes Walter. Walter almost poisons his soyacoffee with cyanide believing it to be a sedative, but he doesn't drink due to his built in poison probe. He follows Walter to beach and arrests an illegal robot smuggler.

OTHER CHARACTERS
WALTER THE WOBOT
Dredd takes his to the beach in Mega-Miami and he falls for Lola. She convinces Walter to sedate Dredd with Sleep-Eezy squash.

LOLA
Robot. She convinces Walter to sedate Dredd with Sleep-Eezy squash, which in reality a bottle of cyanide.

ARRESTS
Two. Lola and her mistress are arrested for illegally importing robots.

DEATHS
Two. Dredd appears to kill two of the robot smugglers with one bullet.

INFLUENCES & REFERENCES
One of the beach-bums calls Walter a "Robot Romeo", obviously alluding Romeo And Juliet, the play by William Shakespeare (1564-1616). A rustback robots says "I come from Barthelona..." in the manner of Manuel from TV show Fawlty Towers (1975-1979)

REVIEW
If you want to see Dredd pleased to see people enjoying themselves, Walter sedating Dredd and wacky racist accents this strip has got it all. Where is Dredd's built in poison probe built into? Why is there no penalty for Walter for attempting to medicate Dredd without his knowledge? Who thought this was a suitable analogy for illegal immigration? This is disappointing.