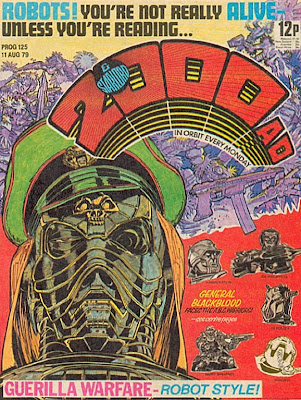 INFORMATION
Mega-City One has a Biotanic Gardens with a collection of alien carnivorous plants. The city also operates more than one penal colony in space.

The Bloodplant is a carnivorous alien plant. It's call is hypnotic and draws its victim in toward its mouth. It should only be kept in a soundproof tank.

Planet K37 Puffballs attach themselves to skin and grow, with deadly consequences.

Music an be played into a Judge's helmet at high volume.

JUDGE DREDD
He heads to the Biotanic Gardens and witnesses the death of Father Earth.

OTHER CHARACTERS
FATHER EARTH
He leads his crusade to Mega-City One's Biotanic Gardens and declares its Bloodplant to be The God Plant. The Bloodplant eats him.

GESTAPO BOB
He and the Cosmic Punks have joined forces with Father Earth's crusade and re-entered the city. Dredd arrests them and sentences them to serve life in a penal colony in space.

DEATHS
Probably hundreds. A Keeper is shot dead, Dredd shoots out the fuel tank for a flame thrower causing an explosion which must have at least killed the wearer, at least two visitors, Father Earth and one of his attendants are swallowed by the Bloodplant.

BEST LINES
Father Earth (to his attendant): "The God Plant! Only you and I survive my dear! Only we have been considered pure enough to gaze upon his majesty!"
(the Blood plant swallows his attendant.)
Father Earth: "I spoke too soon."

WORST LINES
Cosmic Punk (as Dredd shoot the fuel tank on the flame thrower): "The fuel tank! He - Aahh"

REVIEW
Bizarre. Father Earth's crusade ends in something of a whimper, the Cosmic Punks opportunistic return to Mega-City One is dealt with quite perfunctorily and the Power Tower disaster goes unmentioned.
Posted by Dave at 10:00