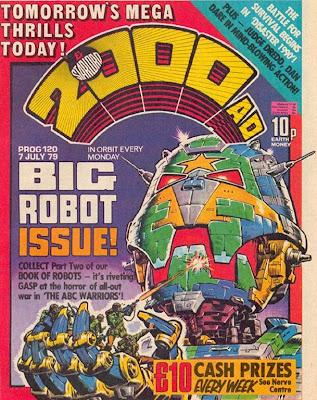 This prog also featured ABC Warriors, Disaster 1990, Dan Dare and Project Overkill strips, some more of Ro-Jaws And Hammerstein's Book Of Robots and a cover by Dave Gibbons.

SYNOPSIS
Dredd uncovers a blackmail scheme that preys on the relative of those in suspended animation.

Ryker's Shuggy Hall on Mega-City One's 2005th Street. The Forever Towers Home For The Semi-Dead is an expensive suspended animation facility. The citizens of Mega-City One pay City Tax.

There are still diseases that medical science cannot cure, but estimations of remaining life expectancy are very accurate. The rich can put their bodies into suspended animation to hold off death.

Beneath the Justice building are Vaults containing a suspended animation facility which houses criminals who have been sentenced pending a cure for their medical condition. Should they ever be cured they will then serve their full sentence.

Shuggy is a game with similarities to pool, but with an uneven bumpy table and pockets atop the hills.

JUDGE DREDD
He delivers the news of the death of Mrs Dreyfus' son to her and learns that he was being blackmailed by Jurgen Monks. He investigates Monks and discovers that all his victims are linked to The Forever Towers Home For The Semi-Dead. He confronts Dr Gold and finds out he's been blackmailing the relatives of his charges. Gold attacks him, Dredd shoots him and inters him in the Justice Department's suspended animation facility.

OTHER CHARACTERS
DR JAMES JULIUS GOLD
He works at The Forever Towers Home For The Semi-Dead. Gold wakes the patients from suspended animation to discover their secrets and blackmail their relatives. Dredd discovers his crime, confronts him and shoots him causing a brain injury. Dredd has him put into suspended animation under the Justice Building pending developments in medical science that will cure his condition and sentences him to life.

MRS DREYFUS
An elderly lady in suspended animation at The Forever Towers Home For The Semi-Dead. She had two hours left to live. Her son committed suicide because he was being blackmailed by a Jurgen Monks. Dredd interviews her about her son and on hearing he is dead she decides to die as well.

JURGEN MONKS
Blackmailer of Mrs Dreyfus' son and many other Mega-City One citizens that have relatives in suspended animation at The Forever Towers Home For The Semi-Dead. Monks flees Dredd and climbs into a garbage disposal chute believing it to be a laundry chute, he is killed.

ARRESTS
Two. Ryker, the Shuggy Hall owner is arrested. Gold will serve life for blackmail as soon as he can be cured of his Dredd-induced brain injury and released from suspended animation.

BEST LINES
Dredd: "Even death is no escape from the law!"

CATCHPHRASES
Dredd shouts to Monks to "Stop in the name of the law!"

REVIEW
This is fantastic. Bolland's art is superb, a great example of future crime and the notion of keeping a perp alive through artificial means so that one they may be able to serve life imprisonment is brilliant.
Posted by Dave at 10:00