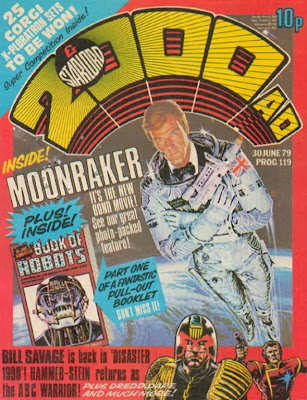 This prog also featured Dan Dare, the debut of ABC Warriors, Disaster 1990 and Project Overkill alongside cut-out-and-keep Ro-Jaws And Hammerstein's Book Of Robots and James Bond cover by Dan Gouzee.

SYNOPSIS
Walter recounts the story of how Dredd put him in prison.

INFORMATION
(The flashback scenes are set in 2099, "not long after" the Robot Wars)

An attempt to rob Mega-City One's Credit Bank was made in 2099. New Sing-Sing is a prison.

Robot laws are very strict. A free robot would face the same penalty as a human. Lawmaster bike cannons can be set to a narrow beam and continuous fire. Named Judges: Judge Mason

JUDGE DREDD
In 2099, not long after the Robot Wars he dealt with a hostage situation. He had his name written on the back of his Lawmaster. Despite his assistance, he sentences Walter to a month in prison for striking a human.

OTHER CHARACTERS
WALTER THE WOBOT
He is something of a celebrity among Robots. He is unpaid. He has sewn Dredd's name into all his clothes. Every Monday, he visits the local hyper-laundry to them. He keeps a scrapbook. Not long after the Robot War of 2099, Walter spent a month in prison after he attended a hostage situation that Dredd was dealing with and delivered the Judge a meal. Walter insists that Dredd eats it. He throws the Judge's dessert into the face of a gunman threatening to kill Dredd. The Judge sentences him to a month in New Sing-Sing prison. 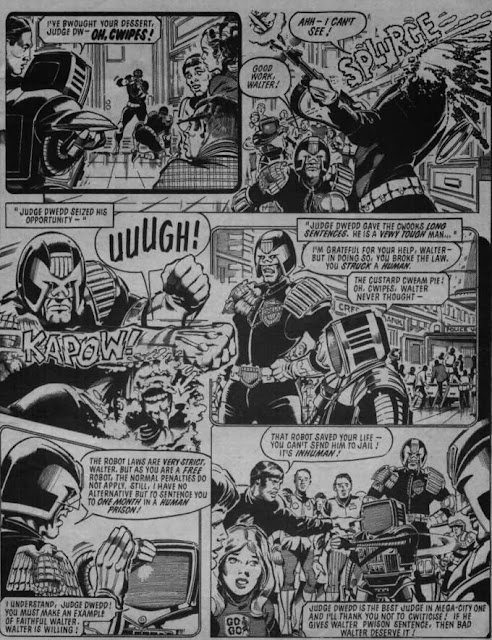 ARRESTS
Dredd gives the hostage takers long sentences and arrests Walter for striking a human, putting him in prison for a month.

DEATHS
One. A hostage is shot dead from within the bank.

WORST LINES
Dredd: "It's time I got tough with these murderers!"

CONTINUITY & CROSSOVERS
Walter's Scwapbook contains photo of him being awarded his freedom in Robot Wars .

MISTAKES
Walter mis-spells Dessert as Desert on his screen.

REVIEW
It's a nice little story, but more suited to Walter's own strip. The use of flashback is nice, but it's not clear why this story is set in 2099 rather than simply last week and Walter's narration soon gets tiresome. The art is great and Walter saves the day in a way that doesn't seem too contrived. The use of the phrase "hyper-laundry" in the first panel, somewhat undermines the bombastic "Judge Dredd Hyper-Cop!" banner above it.

Next Prog: The Forever Crimes!
Posted by Dave at 10:00