Invasion!: 'The Road To Hell'

NAME
Invasion!: 'The Road To Hell'

SYNOPSIS
Savage doesn't fit in at a Resistance base and takes on a Volgan firing squad.

INFORMATION
The V-1 is a road under construction that will run from north to south linking Leeds, Sheffield, Nottingham and Leicester en route.

BILL SAVAGE
After losing their hideout, he and his men take refuge at another Resistance base. The Brigadier in charge takes exception to Savage and is determined that he go through military training. Savage submits to drill and a ten mile run, but ultimately kicks his superior officer in the face and leaves. He discovers a Volgan firing squad about to kill four British workers and he uses a roadlayer to flatten the Volgans into the road. He rescues the British workers. 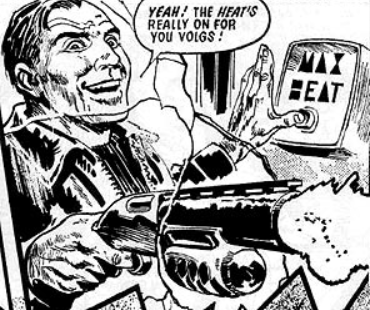 OTHER CHARACTERS
SILK
He takes refuge at another Resistance base.

WORST LINES
Savage: "Went for a burn-up you might say!"

CONTINUITY & CROSSOVERS
The exhausted British workers wear the same uniforms as the prisoners in Invasion!: 'Dartmoor'.

REVIEW
All the ingredients are here: Savage has an authority figure to kick against. Quite literally. He has an opportunity to inflict graphic violence on Volgan troops, and flattening them into the road both provides them with a gruesome death and makes great use of Savage's need to drive large vehicles. To do so in the service of exhausted British workers, who aren't explicitly stated as being slave workers, but its certainly implied.