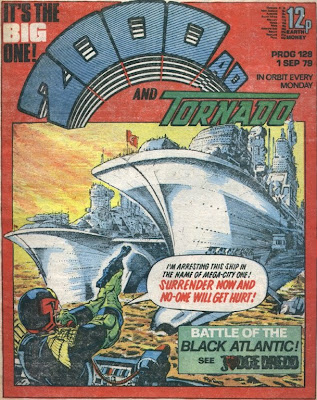 SYNOPSIS
After an uneventful crime blitz, Dredd investigates an East-Meg 1 spy at sea.

INFORMATION
Mega-City One's coastline borders the highly polluted Black Atlantic. The city is shielded from the Black Atlantic by a plasti-barrier, however there are cracks and repair gangs are expected to be fixing them. The city's jurisdiction of the ocean reaches forty miles from the shore. The docks have a customs area and a harbour gate. The city has a new laser defence system, a Science Institute and The Smiling Burger is on 433rd Street.

Section 59(D) of the Mega-City One Criminal Code is: "A Judge may enter a citizen's home to carry out routine intensive investigation. The citizen has no rights in this matter." This has become known as a crime blitz. Robots repair any damage and compensation is available for any inconvenience caused. Citizens found not to have committed a crime can receive a certificate of merit signed by the Chief Judge.

Judges have recently been equipped with new respirators and have access to 'spy-in-the-sky' hover cameras for surveillance. Named Judges: Judge Gibson, Judge Waldo

Citizens are required to keep credit statements for the last fifteen years. New Mutation is a prohibited magazine, unless you have a permit.

The Sov-Blok is surrounded by atomic desert. The Sovs have a fleet of Anti-Pollution ships.

A Turbo-Mist is a vehicle that was available for sale in 2099.

JUDGE DREDD
He can pilot a ship. He helped in a crime blitz on the home of Mr Sweet that found nothing, which piqued his interest and lead to surveillance of Mr Sweet and then reveals his involvement with an East-Meg 1 Spy. Dredd arrests him and follows Sweet's East-Meg 1 contact to the edge of the Black Atlantic and then into international waters where the Judge attempts to arrest an entire Sov Anti-Pol ship. He crashes into the other vessel and falls into the Black Atlantic.

OTHER CHARACTERS
MR SWEET
A spy passing information to East-Meg 1 posing as a researcher at the Science Institute. He is subject to a crime blitz that finds nothing, which in itself intrigues Dredd.

ARRESTS
One. Mr Sweet is arrested for passing secrets to East-Meg 1. Plus a shipful.

CONTINUITY & CROSSOVERS
This story represents an escalation in hostilities since the Sov-Blok were last seen in the Judge Dredd stories The First Luna Olympics and 'Luna 1 War'.

REVIEW
The Fascistic presumption of guilt in the crime blitz opening would clearly have been enough material for an entire strip, but here it is merely the springboard for a story that takes on an international dimension with surprising ease.