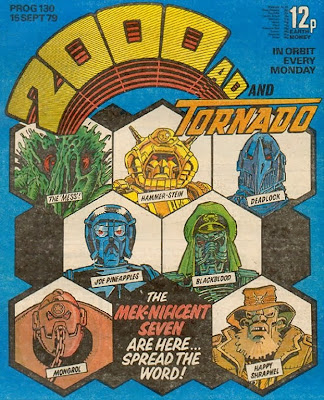 NAME
Judge Dredd: 'Dredd And The Mob Blitzers'
(according to Barney, this strip is also known as 'The Testimonial Of Lips Lazarus')

SYNOPSIS
Dredd must protect a former ganger turned witness for the prosecution.

INFORMATION
Mega-City One has a spaceport and operates a safehouse on the Moon.

Mob Blitzers have automatic self-destruct machines implanted in them.

It is possible to survive a full body amputation if the head can be implanted into a life support bubble. A Series 4 Robotic Body can think, move and speak without the attachment of a head.

JUDGE DREDD
He is protecting Joe 'Lips' Lazarus from the mob. He instructs Lazarus to pretend to be Elmo Hammer and instruct the Mob Blitzers to surrender. They comply and their suicide boxes explode killing them all.

OTHER CHARACTERS
JOSEPH JOE 'LIPS' LAZARUS
Former gangster. He agreed to testify against his former boss, Elmo Hammer. He does impressions, Conrad Conn, Dino Valdi and Elmo Hammer are among them. A week ago, the mob attacked his secret hiding place on the Moon and his body had to be amputated, leaving him a head in a life support bubble and awaiting a Series 4 Robotic Body. Dredd protects him from an attack at the spaceport. The mob steal the Surgical Droids vehicle carrying his Series 4 Robotic Body and move to attack him at the hospital. Dredd instructs him to impersonate Elmo Hammer and to tell the Mob Blitzers to surrender. His impression is convincing enough that they comply and their suicide boxes explode killing them all.

DEATHS
At least ten. Two Mob Blitzers die in the crash at the spaceport, eight more when their suicide boxes go off.

CONTINUITY & CROSSOVERS
Conrad Conn was seen in The Day The Law Died, Part 13, although see MISTAKES. The nose filters have either replaced the respirator seen in 'Battle For The Black Atlantic', or are being phased out themselves. The technology used to keep Lazarus alive is presumably a step on from that which kept Louis Mayer's brain alive in Harlem Heroes, Part 1 and then provided him with a robotic body from Inferno, Part 7.

INFLUENCES & REFERENCES
Lazarus was the name of the man Jesus Christ is supposed to have brought back from the dead in chapter 11 of the Gospel of John. "You Doity Space Rats", is presumably a reference to "You dirty rat" a line attributed to James Cagney for decades despite his never actually saying it, the closest he got was in Taxi! (1932) with "Come out and take it, you dirty, yellow-bellied rat, or I'll give it to you through the door!"

REVIEW
This is great. A satisfying story which initially misdirects the reader and then provides them with with graphic deaths from suicide boxes, a funny headless robot and a character trait which turns out to save the day without having been the obvious reason for its inclusion from the start.

Next Prog: Don't Miss Sob Story - You'll Cry Yourself To Death!
Posted by Dave at 10:00