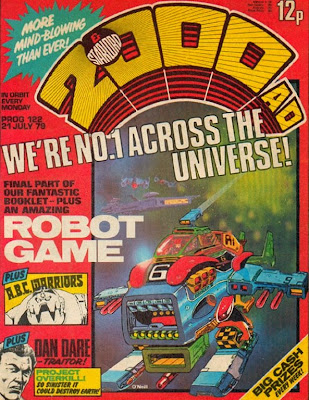 This prog saw the price rise to twelve pence and also featured ABC Warriors, Disaster 1990, Dan Dare and Project Overkill strips, the last part of Ro-Jaws And Hammerstein's Book Of Robots and a Dan Dare cover by Kevin O'Neill.

SYNOPSIS
Father Earth's crusade marches on Mega-City One, while his undercover operatives attack the Power Tower.

INFORMATION
(The day of the election)

Power Tower is Mega-City One's southern electricity generating complex. It is built around a di-crystal central bore hole that descends one hundred miles into the Earth's crust tapping power from the planet's molten core. Scanners on the city's Mutieland wall constantly screen the Cursed Earth for signs of danger.

Dunks is a nickname for pickpockets, while taps are muggers and pongos are confidence tricksters.

Robots do not have the vote.

OTHER CHARACTERS
IKE & IRMA COBB
Couple that run a trading post in the Cursed Earth. They are killed by Father Earth, strangled by his creepers. He has them buried with some seeds so that their bodies will nourish the plants.

FATHER EARTH
Mutant with plants growing over him. He leads a ten thousand strong crusade against Mega-City One. He can control the creepers that grow over him, but they must be watered. 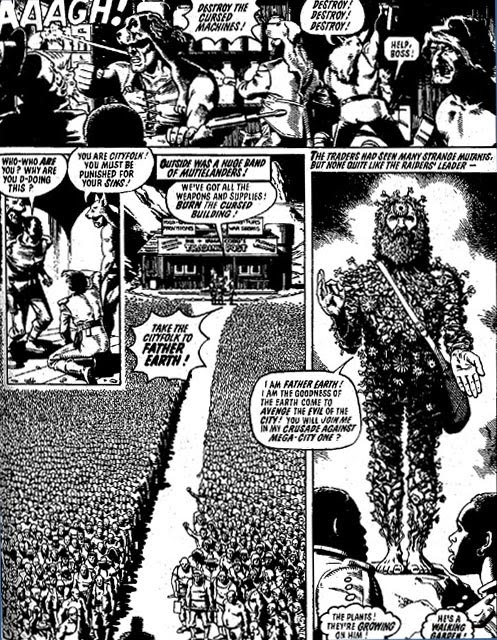 JIM GRUBB
He has been Mayor for eight years. He is up for re-election.

ARRESTS
A number. Dredd arrests a dunk for having 47 wallets on his person and sentences him to two years, and makes a number of other arrests including sentencing L Phillips to five months and P Kranski for two years.

BEST LINES
Dredd: "You normally carry forty-seven wallets, pal?"
Perp: "How much time I got to answer that, Judge?"
Dredd: "Try two years!"

CONTINUITY & CROSSOVERS
Jim Grubb mentions standing up to Cal in The Day The Law Died, part 4 .

REVIEW
This is a great start with three apparently separate plot strands being drawn together. Bolland's art is magnificent and design of Father Earth is fantastic.

Next Prog: Power Tower Erupts!
Posted by Dave at 10:00