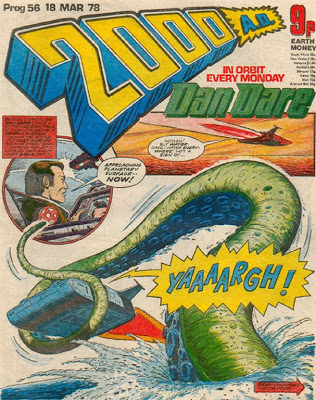 SYNOPSIS
The Harlem Hellcats have more than the Long Island Sharks to worry about.

FIRSTS & LASTS
First work by Peter Knight on the strip.

INFORMATION
An Inferno Firebowl has at least three ramps for the bikers to get to the deathwall.

A cave-in scored by a flier touching down inside the score-semi, is worth three points and sometimes refered to as a maximum cave-in.

GIANT
He confronts Regal Eegle about his confidence. He scores cave-in. His jet-pack overheats and explodes causing injuries to many other members of the team.

OTHER CHARACTERS
TEEJAY CASH
Unconscious and in the path of the Long Island Sharks biker, Marvin saves him.

MARVIN BLOO
He and Moody share a surname, which implies they are cousins on Moody's father's side. He saves Teejay from being runover.

REGAL EEGLE
He scores a cave-in. There was a rumour he had retired from stunt-work because he lost his nerve.

DEATHS
It's unclear from the last panel if the jet-pack explosion kills anyone.

WORST LINES
Marvin Bloo: "Don't write him off yet, Blabber-Lips!"

CATCHPHRASES
We get another "Holy Inferno", this time from the Long Island Sharks biker who didn't quite run Teejay over.

REVIEW
This part manages to cram a lot of story into its five pages. Looking at the psychological aspects of Inferno and the effects upon its players is fascinating and Regal Eegle is an interesting case study. The resolution to last week's cliffhanger and the build up to this week's are both great, but the brief visit to the "floodlit beach" is a bit odd.
Posted by Dave at 10:00