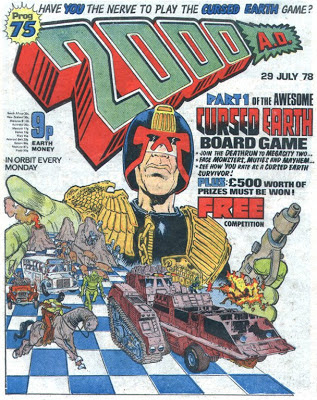 This prog also featured Ant Wars, Dan Dare, Judge Dredd and M.A.C.H.0 strips, a Judge Dredd cover by Brian Lewis and the first part of the Cursed Earth Board Game.

FIRSTS & LASTS
The last appearance of Slim, Zack, Louis, Moody Bloo, Cindy and Inferno itself. For obvious reasons this is the last work by Tom Tully, Massimo Belardinelli and Peter Knight on the strip.

INFORMATION
With the exception of Giant and Cindy Lamont, the Harlem Hellcats are dead.

GIANT
He is forced to watch as Slim, Zack, Louis and Moody die. He is later freed by the police. A week later he attends a joint funeral for the Harlem Hellcats.

SLIM
He is killed in a crash that sandwiched him between two of the bikers of the Wolves Of Death. He is buried alongside the other Harlem Hellcats a week later.

ZACK
He dies as a result of injuries sustained when he is bitten by a Wolf flyer. He is buried alongside the other Harlem Hellcats a week later.

LOUIS MAYER
He manages to intercept the radio-signal being sent to the Wolves of Death and reverse it. Louis sets the droids to attack each other. He is shot dead by the faceless representative of the Syndicate. He is buried alongside the other Harlem Hellcats a week later.

MOODY BLOO
He is shot dead by the Syndicate's representative. He is buried alongside the other Harlem Hellcats a week later.

OTHER CHARACTERS
CINDY LAMONT
She has been released from hospital. Cindy attends a joint funeral for the Harlem Hellcats a week after they were killed.

DEATHS
Four. Slim dies in a bike crash, Zack on the fangs of a Wolf flyer, while Louis and Moody Bloo are both shot by the Syndicate's representative. 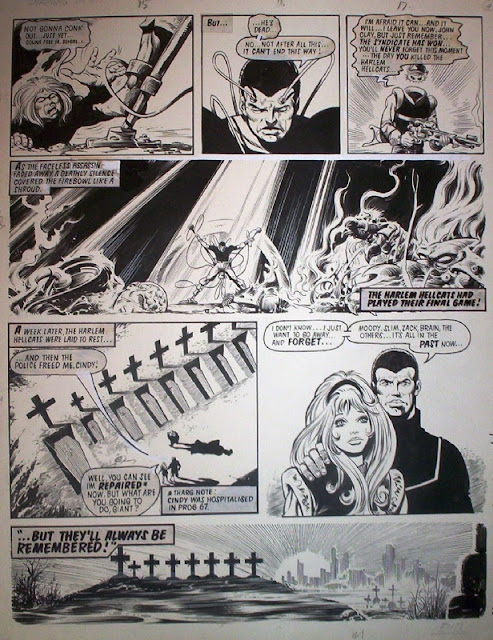 Moody's last words are followed by an acknowledgement of how the reader must be feeling.

We don't have enough time to waste on lines like this.

CATCHPHRASES
Zack calls Louis "Gristle-head", which conjures up rather an unfortunate image.

CONTINUITY & CROSSOVERS
There is a Tharg note to point out that Cindy was hospitalised in Prog 67, or Part 32.

MISTAKES
Louis Mayer (nee Meyer nee Mayer) has returned to the Meyer spelling of his surname.

NOTES
Here's a link to David Bishop writing about the controversy Inferno caused.

REVIEW
Crikey. As with the penultimate part, the 'off-screen' deaths for Slim and Zack are unsettling and give a rushed feeling. Tharg's odd cameo is a surprise. Inferno often repeated the storyline of its parent strip, but where the Harlem Heroes ultimately win, albeit at a very high cost, instead the Harlem Hellcats lose. It subverts your expectations to let the bad guy win and end on a sombre note. It's this sense of loss that the last page hopes to achieve, but it's all undermined by the hurriedness of its three predecessors. I didn't warm to Inferno as a sport, but if the strip had had more of the flavour of these last few parts I think it would have been an absolute classic.
Posted by Dave at 10:00