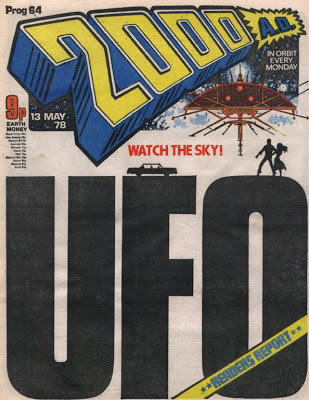 This prog also features Dan Dare, Judge Dredd, Death Planet and M.A.C.H.1 strips and a cover by Kevin O'Neill. It was published alongside the first issue of Starlord.

SYNOPSIS
The Harlem Hellcats begin their match against the Philadelphia Freaks and Artie Gruber attempts to kill Giant.

FIRSTS & LASTS
This strip may well include the first ever extreme close-up of a thumbnail in comics. It may not.

INFORMATION
The Harlem Hellcats' Firebowl has a capacity of ninety-thousand spectators. 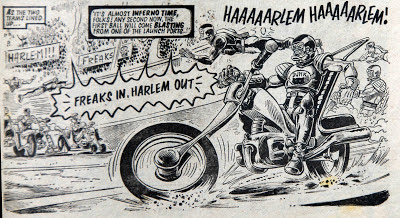 GIANT
His dream about Artie Gruber is still bothering him.

SLIM
Artie Gruber elbows him in the face.

ZACK
He gets first possession, but loses the ball very soon after to Artie Gruber.

LOUIS MAYER
He is still acting as a reserve.

OTHER CHARACTERS
DIMPLES DEVINE
He was the squad-leader of the Philadelphia Freaks.

ARTIE GRUBER
He has an implant in his brain which allows Mr. Chubb to speak to Gruber, cause him pain and also includes a miniaturised bomb.

MR. CHUBB
He has control over Artie Gruber's implant and the bomb it contains. He can activate it with a control under his right thumbnail.

BEST LINES
Torso: "The pain-cell tamed him that time, Mr. Chubb...but the punk's pretty unstable! He could still foul it up!"

CATCHPHRASES
One of the Philadelphia Freak paraphrases Dimples Devine's line from Part 28 "save that hot stuff for the game" back to Artie Gruber.

MISTAKES
Chubb talks about his finger nail whilst peeling back his right thumbnail.

REVIEW
This is essentially a three page strip that follows a very empty introductory page that is surrounded by beautiful headshots for each of the Harlem Hellcats despite only half of them being featured here. Artie Gruber can hear the villain of the piece as a voice in his head, again. This is getting even closer to being a bad remake of the Gorgon's Gargoyles section of Harlem Heroes.