It's been a while, but here's where we left off with Judge Dredd...

NAME
Judge Dredd: 'Billy Jones' (according to Barney this strip is also known as 'Bogie Man')

SYNOPSIS
Dredd and Giant go in search of Billy Jones and his kidnapper.

FIRSTS & LASTS
First appearance of a robot replica and a serious crime perpetrated against children.

INFORMATION
At least 312 television channels broadcast news in Mega-City One.

Plastoid Industries is one of Mega-City One's top twenty industries.

The Howards Building is where Hugh Howards controls him business interests from and boasts a large penthouse.

There is machinery available that can wash, dry and feed a restrained individual.

JUDGE DREDD
He and Giant put the Billy Jones Robot out of action and set a trap for whoever put it in place. Dredd gets information from an engineer sent to fix the broken robot and moves to arrest Hugh Howards for the kidnap of twenty children. 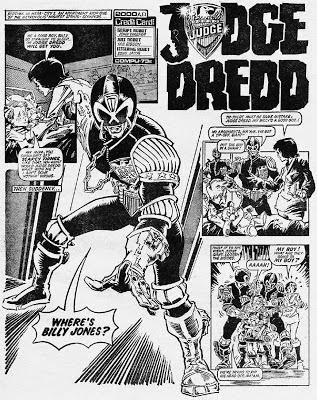 OTHER CHARACTERS
JUDGE GIANT
He assists Dredd with putting the Billy Jones robot out of action and then later in arresting the perpetrators. He has very quick reactions and catches the real Billy Jones as he falls off the roof of the Howards Building.

BILLY JONES
He is a little boy. His father is the chairman of Plastoid Industries and they lives atop one of Mega-City 1's highest strato-scrapers. His mother uses Judge Dredd as a cautionary tale to threaten him into behaving. He has been kidnapped and replaced with a robot by Hugh Howards for industrial espionage purposes.

HUGH HOWARDS
He is a trillionaire businessman. He has kidnapped the children of the chairmen of Mega-City One's top twenty industries and replaced them with robots which transmit information to him. Dredd and Giant attempt to arrest him, but he flees to the roof with one of the children and falls to his death.

ARRESTS
Presumably Howards' robot engineer and the rest of Howard's board of directors, his men and Haskins. At least eleven people.

DEATHS
One. Hugh Howards falls to his death.

BEST LINES
Billy Jones' mother: "My boy! What are they doing to my boy?"
Dredd: "We're trying to rip his head off, ma'am."

Giant: "Taste the strong knuckle sand-wich of the law, Dude!"

You keep your urges to yourself whilst you're hiding in a child's bed.

CATCHPHRASES
Dredd exclaims a "My Dok!"

CONTINUITY & CROSSOVERS
Giant has "inherited the lightning reactions of his famous father..." which is a reference to Giant of Harlem Heroes, Judge Dredd: 'The Academy Of Law' Part 2 and more recently Inferno. Speaking of Inferno, it featured robots so lifelike that they were indistinguishable from people, but they required a constant signal providing them with instructions. Billy Jones' Robot Replica would be next logical step as it seems more autonomous.

MISTAKES
Scary is misspelled as scarey in both the first and last panel of the strip.

REVIEW
The artwork is great throughout and impact of the first page is particularly impressive. The story is slight, but expertly makes some sinister implications about Mega-City One society: kidnap victims that weren't missed, using children to get to their parents and force-feeding in addition to the acknowledged industrial espionage.