NAME
Judge Dredd: 'The Ape Gang'
(according to Barney this strip is also known as 'Monkey Business')

SYNOPSIS
Dredd brings a conflict between Ape and Human gangsters to an end.

INFORMATION
The year is 2099 (this strip takes place over at least four days).

Most animals were killed in the Great Holocaust with the exception of those in zoos. Later the technology was developed to alter the brain-cells of apes to allow them to speak. The freed apes have all settled in a part of Mega-City One now called The Jungle. The buildings are less uniform and feature staircases designed for ape use. There is an establishment called Banana Brunch there. Mega-City Zoo features Gleeps, Muties and now Monkeys.

The Ape Gang and the East Side Mob control different territories within Mega-City One. Gus's Garage is in the area controlled by the former while there is at least one night club and one warehouse in the territory of the latter.

The Animal Nuisance Act 1987 states that any animal creating danger to human life must be kept in a secure place.

JUDGE DREDD
He has a private office at Justice Central. After a visit from Uggie Apelino he consults the Don's mother for information. Acting on what she told him, Dredd and a group of Judges intercept an East Side Mob convoy carrying illegal tobacco and arrest the drivers. They then drive the convoy to its destination where the Ape Gang expect to attack it. After a firefight, the Judges arrest the Ape Gang.

OTHER CHARACTERS
DON UGGIE APELINO
He is a second generation free ape and the leader of the Ape Gang. He visits Dredd with a warning of trouble if the East Side Mob don't remain in their own territory. 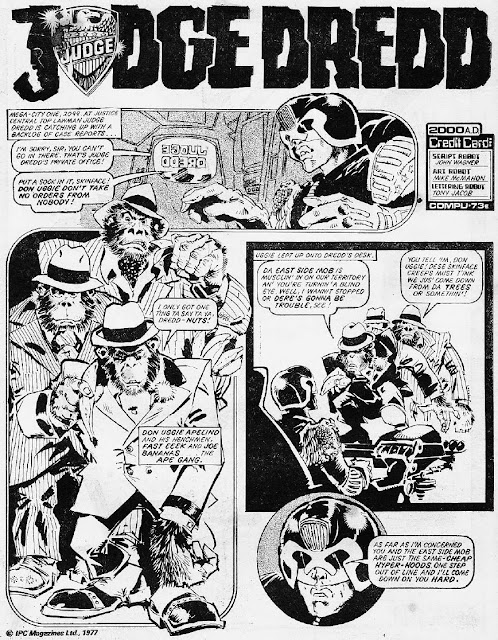 FAST EEEK
He is a second generation free ape and Don Uggie's henchman.

JOE BANANAS
He is a second generation free ape and Don Uggie's henchman.

MAMA APELINO
She is a first generation free ape and Don Uggie's mother. She gives Dredd information on a convoy of illegal tobacco that the East Side Mob are bringing into the city and the Ape Gang are expecting to intercept.

SONNY COSMO
He is Number Two in the East Side Mob. He is drowned by members of the Ape Gang whilst wearing concete shoes.

ARRESTS
At least of the East Side Mob and three of The Ape Gang.

DEATHS
At least three: The Grunt Brothers during the attack by the East Side Mob on Gus's Garage and Sonny Cosmo is drowned wearing concrete shoes in a retaliatory strike.

WORST LINES
Uggie: "I only got one ting ta say to ya, Dredd - Nuts!"

CATCHPHRASES
A member of the East Side Mob shouts out a "Drokk it!". The Apes refer to humans as Skinfaces three times and we get three Eeks (not including references to Fast Eeek) and five Grunts from them as well.

INFLUENCES & REFERENCES
This strip is like a cross between Planet Of The Apes (1968) and The Godfather (1974), while the ending takes its inspiration from sources like the PG Tips adverts featuring Chimp's tea parties broadcast between 1956 and 2002. Yes, 2002.

MISTAKES
Fast Eeek is extended to Fast Eeeek when Dredd shouts it.

RETROSPECT
Ten Four Good Buddy is written on the front of the vehicle at the head of the convoy. It will be CB Radio slang like this that will partly inspire Ace Trucking Co.

NOTES
It would take more than brain alteration to give apes speech, because primate vocal cords do not fully close and would require some form of augmentation to make speech possible.

REVIEW
A strip that uses talking apes to examine organised crime. What's not to love? 'The Ape Gang' eschews many ape related puns in favour of a genuine mafioso storyline which takes in issues of second generation immigration and gang warfare, with apes. The artwork of the opening page that introduces Don Uggie and his henchman is brilliant, the explanation of how apes came to talk is great (although it glosses over the far more interesting why) and the suggestions of the architecture of The Jungle make for a very interesting part of Mega-City One.

New Adventure Next Prog.
Posted by Dave at 10:00