SYNOPSIS
Dredd and Giant try to prevent the racers from reaching the finish line.

FIRSTS & LASTS
First work by Brian Bolland on the strip and the first use of John Wagner's John Howard pseudonym. 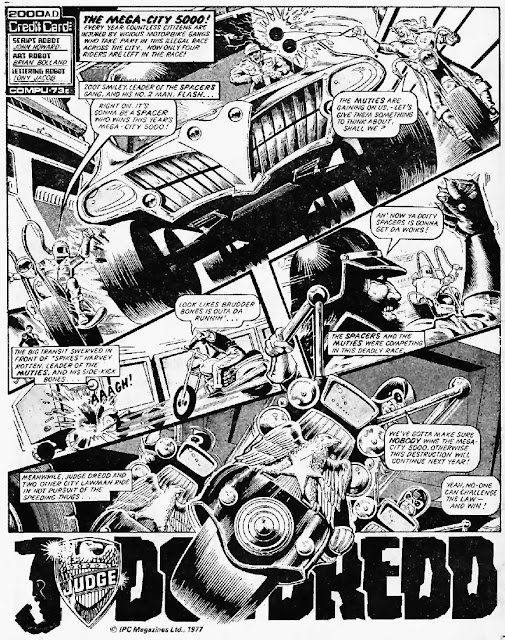 INFORMATION
Cosmo's Emporium in Mega-City One is surrounded by a spiral walkway. The Mega-City 5000 is an annual race across the city to the Westway Beacon.

The Speed Roll is one of the first things taught at the Academy. Named Judges: Judge Hunt.

OTHER CHARACTERS
SPIKES "HARVEY" ROTTEN
He punctures Flash's front tyre and puts him out of the race. Rotten is in the lead when he enters a game of chicken with Judge Giant. The Judge leaps to safety and Spikes crashes into his bike. He falls inches short of the beacon and winning the race.

BONES
Spikes "Harvey" Rotten's sidekick. He is killed in a collision with a big transit.

ZOOT SMILEY
At one point, he is in the lead while his number two, Flash, is in second place. Dredd puts him out of the race with a baton hit to the face.

FLASH
Zoot Smiley's number two. He is briefly in second place behind Zoot. Spikes Harvey Rotten punctures his front tyre and puts him out of the race.

JUDGE GIANT
He and Judge Dredd follow the raceleaders to the finish line. He finds himself in a game of chicken with Spikes "Harvey" Rotten. Giant puts his Lawmaster on auto and speed rolls out of danger.

JUDGE HUNT
He is thrown from his Lawmaster. Condition unknown.

DEATHS
Bones is killed by a swerving big transit.

BEST LINES
Cake carrier: "Dirty stinkin' thugs! You wouldn't get away with this if there was a Judge around!"
Judge Dredd (as cake Splats face): "Excuse me, Citizen - Official business!"

WORST LINES
Zoot: "As soon as we shake these lawmen I'm going to deal with you but good, Mutie - Dig it?"

CONTINUITY & CROSSOVERS
Judge Hunt could well have been the Cadet Hunt listed on the honour roll of 'The Academy Of Law', Part 1.

INFLUENCES & REFERENCES
Rebel Without A Cause (1955).

NOTES
There is a woman with a shopping bag bearing the name Bollo's, a reference to artist Brian Bolland

John Howard is a pseudonym for John Wagner. 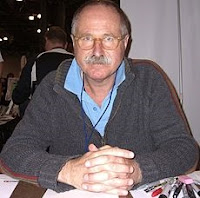 Prior to drawing this Brian Bolland had worked on a Dan Dare strip called Greenworld. This was his first Judge Dredd strip and over the next four years he would draw plenty of him. He contributed to epics The Cursed Earth, The Day The Law Died, The Judge Child and Block Mania alongside shorter tales as well as 12 Walter The Wobots, a Tharg's Future Shock and a Tharg The Mighty. He has also provided artwork for covers, star scans, games, interviews etc. He has a website and a blog.


REVIEW
The artwork on offer here is massive improvement on recent efforts. Brian Bolland's page layouts are dynamic and the facial expressions of his characters are beautifully drawn. The second part of the story has much of the expositionary information that should probably have been in part one.
Posted by Dave at 10:00