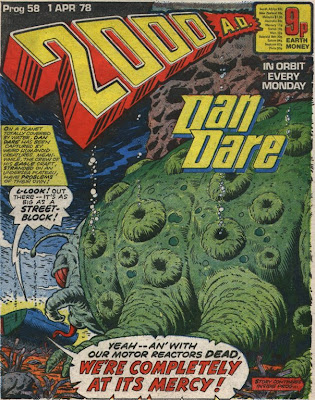 INFORMATION
Beehive Jungle in Up-State New York, was originally built for working citizens, but they revolted against being separated from the rest of society. It's now largely populated by bike vandals, 'Troggies' and 'Zanies'. A new brand of garbage robots patrol the area as well, they are operated by remote control. 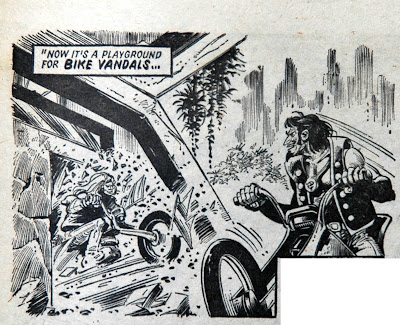 The Harlem Hellcat's new superliner comes with a sickbay equipped with video-ray scanner, and has a satellite chopper in its transport bay.

GIANT
He, Louis and Moody Bloo go in search of Kalman.

ZACK
He is recuperating in the sickbay of the team's new superliner.

LOUIS MAYER
He has tracked down Pearly's manufacturer, Arfon D. Kalman. Kalmon runs Kalman's Kreations, a droid factory on level nineteen of the Beehive. He, Giant and Moody Bloo go in search of Kalman.

OTHER CHARACTERS
MOODY BLOO
He, Giant and Louis go in search of Kalman.

RIP VENNER
His broken arm is healing as he watches on the video-ray scanner in the team's new superliner.

TEEJAY CASH
He is recuperating in the sickbay of the team's new superliner.

DEATHS
One. Gee-Nine's operator is chompfed in the robot's pincer by an unknown individual using the remote control.

BEST LINES
Moody Bloo: "After the way you chickened out against the sharks? No way, Smoothie! I'd rather have my old granny along..."

WORST LINES
Giant: "Maybe Brain has a lead on those creeps. Let's go see him...he's in sick-bay with the others."

How long can Giant wait for potentially vital news?

CATCHPHRASES
Moody Bloo gives us another "Holy Inferno!", while Giant goes a bit Burt Ward as Robin with a "Holy 'Droid-Bait..."

CONTINUITY & CROSSOVERS
The Beehive is described as "a rotting concrete oasis for 'Troggies' and 'Zanies', the dropout of society. Troggies were undergorund dwellers previously seen in Judge Dredd: 'The Troggies', while Zanies were rich socialites featured in Harlem Heroes. The punctuation implies these are nicknames and in the case of the former may well have been reclaimed by the time they encounter Dredd.

RETROSPECT
Robot rubbish collectors have already become a reality in some parts of the world.

NOTES
The is a reptile among the debris of the Beehive on the last page with an indecipherable thought bubble that implies an intelligence.

REVIEW
The depiction of the Beehive and the presumed Syndicate operative are great, but the tour of the superliner feels like familiar territory and the resolution to the cliffhanger has quite a lot to live up to.