SYNOPSIS
It's Christmas on Luna-1, Walter has been kidnapped and there is another attempt on Dredd's life.

FIRSTS & LASTS
The first strip to explicitly take place at the same time of year as it was published.

Luna-1's weather control creates artificial snow at Christmas. Herman's Hotel is an establishment with at least nine rooms. The penalty for littering on Luna-1 is six months penal servitude.

Flexi-Steel is as strong as steel, but flexible.

JUDGE-MARSHAL DREDD
He attempts to rescue Walter, smashing through the window of Geek Gorgon's hotel room on a hover-bike. Geek threatens to explode Walter's bomb unless Dredd submits to being beheaded. The Judge complies, but his neck breaks Geek's axe. Dredd was wearing flexi-steel around his neck. He was planning to work through Christmas, but he has got Walter a new drink dispenser tap as a present. 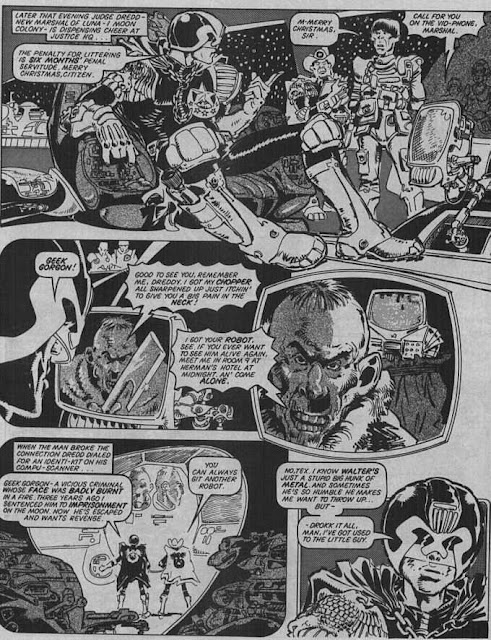 OTHER CHARACTERS
WALTER THE WOBOT
He washes Dredd's clothes at the hyper-laundry. Walter is kidnapped by Geek Gorgon and attached to a bomb. He buys Dredd long monogrammed underwear and an electric nose-wiper

GEEK GORGON
A killer, the axe is his weapon of choice and his favourite method of killing is beheading. His face was burned in a fire three years ago. Dredd sentenced him to imprisonment on the Moon. He has escaped, kidnapped Walter and attached him to a bomb. He sends Dredd an ultimatum and attempts to behead the Judge.

WORST LINES
Geek: "...Now say your prayers an' close your eyes...Santa's gonna give you a nice surprise..."

CATCHPHRASES
Dredd gives us a "Drokk it all, man"

Walter's opening ditty deserves a mention: "Chwistmas is coming, the goose is getting fat. Please put a penny in Judge Dwedd's hat...If you haven't got a penny, a million cwedits will do, Judge Dwedd is worth that much to me and you!" 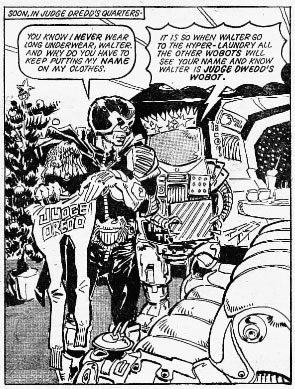 REVIEW
Christmas turns out to be just another day for Dredd. This is the third consecutive strip with someone out to kill Dredd and so you could expect it to feel a little repetitive by now. The antidote to this appears to be to dress your killer in a Santa suit. This strip also uses Walter very successfully. Mewwy Chwistmas indeed.