SYNOPSIS
Dredd tries to stop a deadly race through Mega-City One.

INFORMATION
The Mega-City 5000 is a motorbike race that runs along the entire east coast of the USA and is limited to 5000 riders. A couple of thousand people have been killed so far.

Synthi-marge is presumably a synthetic margarine.

JUDGE DREDD
He mans a barricade. When the race leaders have jumped over it he follows on his Lawmaster.

OTHER CHARACTERS
SPIKES "HARVEY" ROTTEN
Leader of the Muties. The truce until the racers breach the Judges' barricades was his idea. He uses a riot shield as a ramp to jump over the barricade.

ZOOT SMILEY
Leader of the Spacers. He was in first place in the race. He agrees to Rotten's truce. 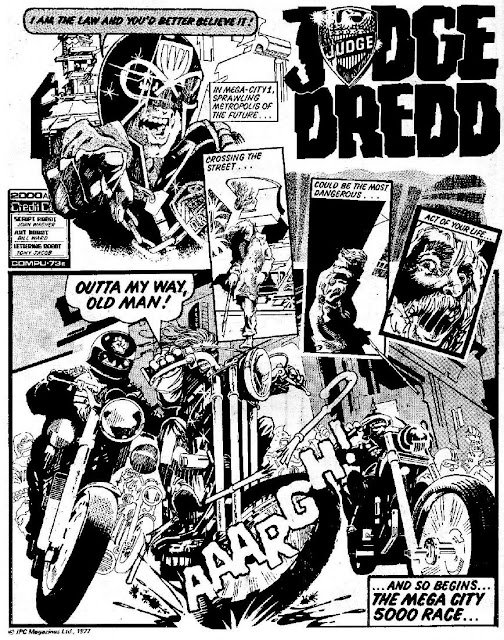 DEATHS
At least three. A pedestrian is run over by a biker. A Judge is later smashed against a column by Spikes and Zoot. There may be others, but it isn't made clear who dies and who doesn't.

BEST LINES
Dredd: "When was the last time you saw a dentist, creep?"

CATCHPHASES
Dredd gives us another "I am the law and you'd better believe it!", while a Mega-City One pedestrian lets an "Aaaie!" which is a variation on a theme.

MISTAKES
How can something be both lawless and strictly limited to 5,000 entrants? 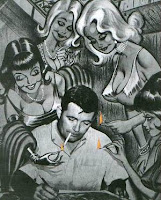 Bill Ward only ever drew part one of Judge Dredd: 'The Mega-City 5000' for 2000 A.D., but elsewhere he was very well known for his 'Good Girl Art' and creating the risqué comics character Torchy. He died in 1998.

REVIEW
The geography of the barricade jumping and the Judge slamming double-play set pieces work really well, but there is a distinct lack of motion in much of the rest of the artwork. We have no idea what is at stake here, who is organising this or why when there is a Cursed Eath to race through with impunity these bikers would race through Mega-City One instead.

Continued Next Prog.
Posted by Dave at 10:00