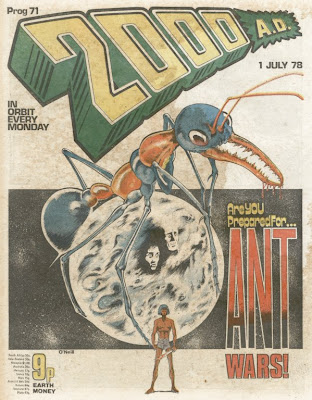 SYNOPSIS
The Syndicate kidnaps Giant and calls the rest of the team to the Death-Bowl.

Since the Washington Wolves stopped playing their Firebowl has fallen into disrepair and is now derelict it is known as the Death-Bowl.

GIANT
He is awoken by his android replica of Artie Gruber. The remote control doesn't seem to be working. They fight and the android knocks him out and carries him out of his apartment and into the night.

ZACK
He didn't get back to the flat he shares with Giant last night.

LOUIS MAYER
He can pick up terminal relay signals which send information to androids programmed to self-destruct.

OTHER CHARACTERS
RIP VENNER
He is killed when the Syndicate's android replica of Artie Gruber self-destructs.

ARTIE GRUBER'S ANDROID REPLICA
On the instruction of the Syndicate it fights Giant, renders him unconscious and kidnaps him. It delivers a message to the remainder of the Harlem Hellcats, that the Syndicate has Giant, and an ultimatum that the entire team be at the Death-Bowl at midnight. It explodes taking Rip Venner with it.

DEATHS
One. Rip Venner is killed by the explosion that destroys the Artie Gruber Android Replica.

BEST LINES
Junk (of the Funny-Pod's driver): "Probably an autograph-hunter!"

This isn't how Moody speaks at any other time in the strip, least of all about something as emotive as this.

INFLUENCES & REFERENCES
The real Artie Gruber has already been compared to the monster from Frankenstein, but the sequence here of Giant's unconscious abduction is akin to the sequence of the drowned girl being carried by her father in the 1931 film.

REVIEW
One down. Rip Venner's death gives this latest threat from the Syndicate a bit more bite, but it's a shame that we lose Artie Gruber all over again. It's obvious that this a building to a showdown of some sort.

Next Prog: Death Stalks The Stadium!
Posted by Dave at 10:00