SYNOPSIS
Dredd is sworn in as Judge-Marshal on Luna-1 and there is another attempt on his life.

INFORMATION
Luna-1 has a small town which features Moonies Sodas, Moonies Bebop, Moonies Grav Boots, Moonie For Hats, Moonie Sauna and the Last Gasp Saloon. The remains of the Apollo 11 landing craft are in Luna-1's town as a monument to the first moon landing of 1969 with a plaque that bears the names of the astronauts: Armstrong and Aldrin. The ownership of firearms and the consumption of alcohol is illegal in Luna-1's town. Several Judge-Marshals of Luna-1 have died in the line of duty.

There is a Badlands Dome with a ranch at its edge.

Gin, Synthi-Whiskey and Moon Cactus Juice are all alcoholic beverages.

Robo-slingers are gunfighting robots. Nobody ever beat a robo-slinger on the draw.

Due to the low gravity, gravity boots are required and hover-bikes are used on the moon. Moon Pods are lunar transportation which resembles a mule. 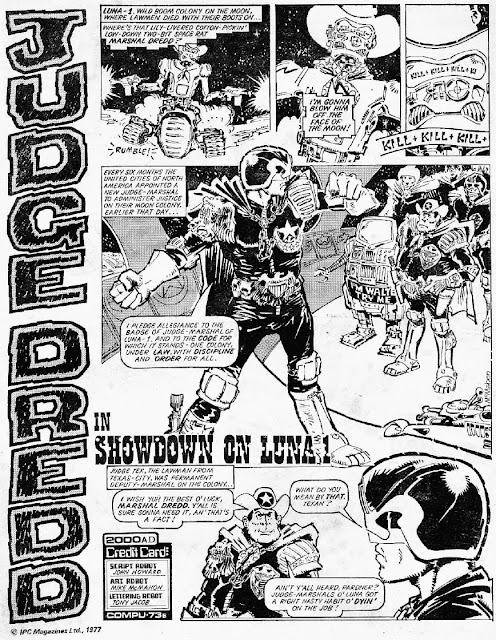 JUDGE-MARSHAL DREDD
He is appointed Judge-Marshal of Luna-1. He takes on illegal gun ownership and alcohol consumption in Luna-1, before he is challenged to a duel by a robo-slinger. His new badge of office gave off a signal which the robo-slinger's darts were homing in on. Dredd beats the robot, throws his badge clear and it is destroyed by the homing darts.

OTHER CHARACTERS
JUDGE TEX
He is the permanent Deputy-Marshal of Luna-1. He is Texan. He declines to assist Dredd in arresting gun owners, drinkers or in a duel.

WALTER THE WOBOT
He attempts to take on the robo-slinger himself.

C.W. MOONIE
The noted Moon explorer. He lives on his ranch at the edge of the Badlands Dome, but hasn't been seen in years. He owns most of Luna-1, including Moonies Sodas, Moonies Bebop, Moonies Grav Boots, Moonie For Hats, Moonie Sauna, Moonie Fabications and a company that makes robo-slingers.

INFLUENCES & REFERENCES
While Dredd pledges allegiance to his new badge he paraphrases the pledge of allegiance of the United States, formerly adopted in 1942. Armstrong and Aldrin are of course Neil Armstrong (1930–2012) and Edwin 'Buzz' Aldrin who landed on the Moon on the 20th of July 1969. The Moon Pod resembles the game Buckaroo, released in 1970.

REVIEW
This strip is our first proper insight into the new format that the move to Luna-1 has created. From its bullet-riddled title, Showdown On Luna 1, makes no bones about being a western and the Moon as a Wild West. Gone are the crimes of the future and in their place are older crimes with futuristic trappings. The artwork comes into its own during the duel, especially the panel showing a view of the Luna-1 street and robo-slinger through Dredd's legs.