SYNOPSIS
An office worker goes Futsie as everyone else celebrates New Year.

The capital of Luna-1 is Luna City. Moonie Enterprises has a vast complex. Buzz Aldrin Street has metered parking.

JUDGE-MARSHAL DREDD
He supervises the New Year's Eve Laze-works display. He assists Arthur Goodworthy Junior in searching for his father.

OTHER CHARACTERS
ARTHUR GOODWORTHY
He works as Number 31 clerk at Moonie Enterprise Complex. He has a wife and a son, Arthur Goodworthy Junior. His wife has been ill and has been admitted to hospital for an operation. He has a backlog at work and is given until midnight to deal with it or his contract is terminated. He works through the office New Year's Eve party and finishes just before midnight, when a co-worker scatters his out tray all over the office. At exactly seven seconds into the new year Goodworthy goes Futsie, attacks his co-workers and some parking meters. Dredd sends him for medical treatment and expects him to be mostly recovered in a few weeks. 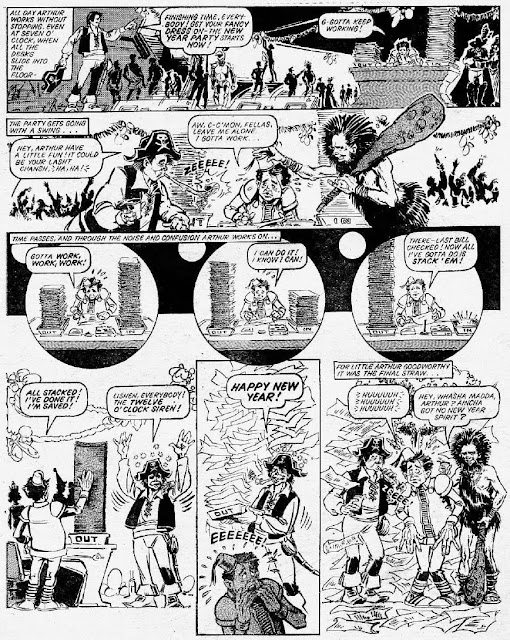 ARTHUR GOODWORTHY, JUNIOR
When he hears that his father has gone Futsie, he goes in search of Dredd.

MR MOONIE
Via a scan-cube in the Moonie Enterprises Complex, he gives Arthur Goodworthy Senior an ultimatum to clear our his backlog by midnight or lose his job. Later two of his hired thugs come looking for Goodworthy, but instead find Dredd.

WORST LINES
Moonie's Muscle Man: "Our bullet's are just bouncing off! He's gonna crash into us!"

CATCHPHRASES
Futsie has clearly passed into common parlance, and huuuuh, huuuuhs are apparently one of the symptoms.

MISTAKES
2100 is not "the dawning of a new century", but instead the last year of the old century.

RETROSPECT
The setting of this strip means that all those before it took place in 2099, and more than any other sets a precedent that time moves forward for Dredd at about the same speed as the reader and Dredd's adventures are set 122 years after their initial publication.

REVIEW
This is a game of two halves. The first half depicting the events that drove Arthur Goodworthy Senior futsie is brilliantly explored. The latter half following the Arthur Goodworthy Junior and Dredd trying to find him is much simpler. Both manage to keep the Moonie storyline going. It ends on an interesting note of Dredd reassuring the younger Arthur Goodworthy followed by a thought bubble that reveals that the Judge is lying.