Walter The Wobot: 'Walter’s Brother', Part 4 - The Owigin Of Walt'

SYNOPSIS
Walter's brother explains why he framed him for bank robbery.

Reject robots are deactivated and used for scrap metal.

WALTER THE WOBOT
He was constructed on Luna-1 as a drink dispenser. His twin brother, Gus, has brought him to the site of the construction. 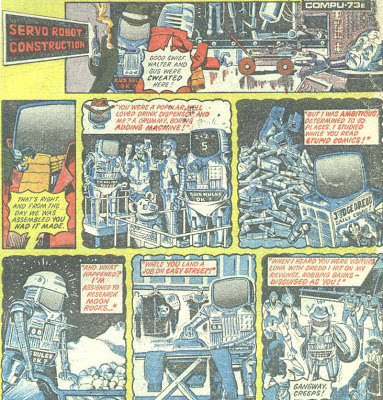 OTHER CHARACTERS
GUS
He was constructed on Luna-1 as an adding machine, but he studied hard to become something else. He was assigned to research Moon rocks. Envious of Walter's position, he decided to rob a bank disguised as his brother to frame him.

JUDGE-MARSHAL DREDD
There was a Judge Dredd Daily Comic!.

WORST LINES
Gus: "Now all I got to do is turn you in. Dredd will probably give me your job for that."

INFLUENCES & REFERENCES
In his flashback, Young Gus has a Fozzy Bear toy from The Muppet Show (1976-1981)

RETROSPECT
Walter reads Judge Dredd Daily Comic! in the flashback. In 1986, at the height of the Daily Star's interest in the character there was both a Saturday strip and a weekday strip, which when combined with the strips in the weekly progs meant that there was at least one Judge Dredd strip for every day of 1986, more if you take Annuals and Sci-Fi Specials into account. Later, interest surrounding the first Judge Dredd movie saw the lawman appearing in 2000 AD, weekday editions of the Daily Star, Judge Dredd Megazine, Poster Progs, an eponymous title for DC, another called Legends Of The Law, a more child-friendly title called Lawman Of The Future as well as tangles with Lobo, Batman and multiple movie adaptations meant that Dredd again put in more appearances in 1995 than there were days of the year.

REVIEW
It's nice to see Walter's back story filled in and all the more interesting to see it done by another character.